Compare and Contrast: Things That Kind of Squick Me Out

From 1967 (but not officially released until 1987), please enjoy (if that is the word) The Byrds, featuring the song's composer David Crosby on vocals, and "Triad," the musically memorable but lyrically (er) troubling ode to...well, you know to what.

And from 1968, and the (in retrospect, far more uneven than I remembered) Crown of Creation album, here's Jefferson Airplane's better-known version, featuring the irrepressible Grace Slick.

My Jefferson Airplane wanna-be college band used to do a really nice cover of the JA arrangement (those guitar parts were really fun to play live) but to be honest I never really thought much about the song's thematic content back in the day, and until I discovered the Byrds' original in '87 I had pretty much forgotten the whole thing.

Upon encountering it again with the wisdom of years, however, I distinctly recall thinking that it sounded like the kind of song that Dan Aykroyd's SNL character E. Buzz Miller would have really, really dug. Seriously -- you could practically smell the corned-beef sandwich stains on his polyester shirt.

Okay, that's a little unfair to Crosby, and given that the most avant-garde sexual fantasy I've ever had involved two women (in the same year), I may be the wrong person to weigh in on this sort of thing. On the other hand, I do think that, despite my current uneasiness with "Triad," it was always going to be more palatable coming from somebody who looks like this... 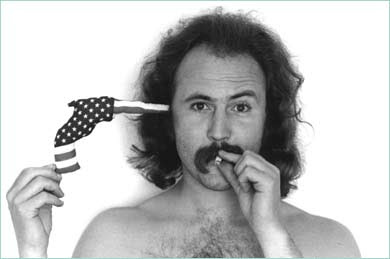 It is an interesting question. We have no trouble giving up the same love to both Picasso and Da Vinci, or Bach and Chopin, or Mark Twain and Toni Morrison, or Thai curry and bangers 'n' mash, maybe depending on the mood but without much preference overall. But nobody calls us an art slut, or a literature slut, or a music slut...

Although, if somebody loves both Mike Love and Ted Nugent, I probably wouldn't want them babysitting my cat.
:)

Triad (and even the JA version gave him songwriter credit so I knew whose POV I was hearing) was the moment I realized that David Crosby was the most pompous, self-congratulating pop star n the world.

Nice to know that "Triad" had the same effect on everybody. I remember when it came out, I stepped back and said, "Uh-uh, I ain't goin' there." And all fantasies with Grace Slick stayed on the duo level.

Neither version of this song ever did much for me, but after Crosby came into my store one afternoon and treated me like dogshit on his shoe, even "Lady Friend" can't play without giving me the slightest twitch.

This was one of those songs that I never really listened to the words -- it was just another nice melody from JA that floated on by. It was many years later when somebody told me what it was about and then I actually *listened* to it and got it.

"Two women in the same year." Brilliant. I may have to steal that one.

And then there was Melissa Etheridge.....

Jeez, if this squicks you out, you better stay away from the Prince catalog;>

Well, I hate to sound like Tipper Gore, but that line about Darling Nikki in the hotel lobby always struck me as a little much.

You were always a little uneasy with the whole hippie thing, Steve. You fit in much better with the new wave ten years later.

By the way, fuck all of you, both versions are great! In my fantasy I was in bed with both Grace and Jane Fonda. Still might do it if my wife wouldn't catch me.

BTW, it's not the idea of a menage a trois that I have a problem with. It's the smarminess of the song, at least as I hear it.

Yeah, it's less important to him that it happened than that we know about it.

I never liked either version, but I've tried to like the Byrds version just because I feel that I should.

I tried to get D. Crosby to do a quick Q/A for my college newspaper when he played solo there in '74 or '75. As we started I put in a request for "The Airport Song" in his set. He sort of spit at me and walked away. I think he even ragged on me during the set. Sure, I was an idiot to ask (apparently), but the original Pre-Flyte LP was one of my favorite LPs of all time, and I foolishly thought he'd be flattered that I knew the song.

You should have asked for "Mind Gardens."

I never quite understood the brouhaha over "Darling Nikki." Hadn't anybody who freaked over that single line in that otherwise tame (by Prince standards) song ever heard anything else from Prince's catalog? This was coming from a guy who'd written a song about how badly he wanted to sleep with his own sister. Who had multiple songs with simulated (I hope) sex. Who had some of the most memorably filthy lines in rock 'n' roll history. (This being a family site, I won't repeat them here.) Going all PMRC over "Darling Nikki" is like hating George W. Bush because he's a Texas Rangers fan.

As for the actual topic of today's post, I've always been allergic to hippies. Can't stand Crosby or JA. Although that picture of Grace could make a man with less self-control do a Nikki.

And speaking of sleeping with your sister, Shirley Maclaine famously said once that she kind of wanted to go to bed with Warren Beatty just to see what all the fuss was about.
:-)

As fellow tribe members, Steve, I think we're always drawn to the shiksas. It would take Freud years to figure that one out.

Yes, but Shirley Maclaine is insane.

Actually, I kind of understand what she meant.
:-)

Personally, mine is George Clooney.

Actually, mine was Lyle Bettger.
:-)

It's the smarminess of the song, at least as I hear it.

Yeah, it's less important to him that it happened than that we know about it.

It's worse than that, it's the arm-twisting. I don't find sexual encounters you have to browbeat the partner(s) into very attractive. I keep wanting it remind him that no means no.

I never thought of this song as any more than just a hippy paean to free love, and a nice melody.

I'm pretty sure that CSN released this way before 1987, I remember hearing it in 8th grade, and it wasn't Grace ...

Gee, David Crosby is a self-centerd asshole? Why am I not shocked?

"Why can't we go on as three?", to me, is not just about a casual menage-a-trois. It slides into the sister wives, hippie free love thing, which always made me want to puke.

And it's even stupider and less realistic when sung by a woman.

Anyone who tells me they don't feel or understand jealousy is either immature, a liar, or a sociopath, afaic.