To be honest, I have no idea, having never heard it, but I recall seeing The MBAs' 1982 Born to Run Things album cover in the window of a record store in the Village and laughing out loud. 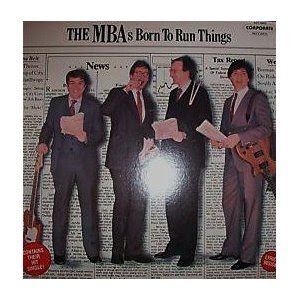 Never bought it, of course, and to my knowledge its never been on CD. I've been telling people of its existence for years now, but they usually assume that I'm kidding. The vinyl is up for sale at Amazon, though, which is where I snagged the cover jpeg.

Is it any good? Like I said, I never actually heard it, although according to the Trouser Press website it's a funny idea whose execution is a little weak. And a protracted search of the intertubes has turned up exactly no mp3s derived from it, so I can't say one way or the other.

In any case, I still think the cover is a riot. Anybody have any firsthand experience of the album they could share?
Posted by steve simels at 12:11 AM

I had a friend who owned this record and I heard it once or twice. What I remember is that the music was fairly good, the lyrics tried a little too hard to be clever, and the whole thing never was quite as memorable as the title. Wish I remembered more -- including whether there were any real standouts.

It's difficult to anticipate how deep the satire would go on this record. MBAs were pretty smug in 1982, and many were prancing down Sixth Avenue in pinstripes, playing air guitar, and imagining that being the boss was as cool as being "The Boss".

Oh, it's an artifact of High Yuppie, no question. Just not sure if its actually funny....

One of the things I appreciated about your contributions to TMFKASR is that you would occasionally call your reader's attention to the more comic side of rock. I remember (obviously) Tonio K., who rocked besides being funny, but others such as Root Boy Slim and the Sex Change Band. I bought their first record just on your say-so, plus of course I had to have a copy of the legendary Boogie Til You Puke.

Elroy -- thank you, but I cannot tell a lie; one of my colleagues at the rag -- Joel Vance -- was the big Root Boy Booster, not me.

I think I may have seen Root at one point, but I never wrote about him, to the best of my recollection.

I haven't listened to the album in a long time, but, based on my recollection, I think Alex's comments pretty well describe it.

I do remember that " Jesus H Chrysler" was a standout for its well-executed psuedo-Oak Ridge Boys gospel vocals. And they did a great job of integrating the MBA buzz words of the day into their lyrics (it's not easy making "optimal capital structure" fit into a pop song).

The group consisted of two Harvard MBA students and two Stanford MBA students (who fully appreciated their own absurdity and privilege) and the album was recorded before their graduation (and their subsequent swearing an oath of allegiance to the giant vampire squid and its slimy kin).