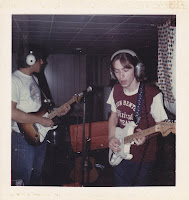 Our regular readers will be shocked to learn that, after nearly two years, I'm close to finishing the final edit on my book Boys Don't Lie: A History of Shoes. Life has interfered, as it tends to do, and the book has grown since its inception, but I feel really good about the text and the project: I hope it will accomplish my goal, which is just to answer the question "whatever happened to those guys?" and maybe, just maybe, restore to them the prestige I think they deserve.

In that spirit, I present the opening of the closing of the book. Enjoy!

It’s April 5, 2010, and I’m sitting in an emergency room somewhere in the Midwest with John Murphy—muddy from the same fall that sent me here—and Gary Klebe, grimly studying my x-rays and predicting surgery or worse. John and I have gotten caught in a freak hailstorm—large, round, prairie hail, like marbles—with predictable slapstick results, and now my arm is broken. Gary, responding to my text, has joined us here.

The doctor comes in, making chipper small talk while he wraps my wounded left wing in a stabilizer for the night. You know this conversation: you've had this conversation. "Where are you from?" "What do you do for a living?" It’s a measured dance of civil protocol, and we’re all playing our parts. The inevitable question comes. “So, what are you doing in the Midwest?” he asks, downright perky.

“About what?” he asks, not really listening.

“About these guys.” I gesture with my good right arm toward my companions. That gets his attention. He stops what he’s doing, looks at them—John disheveled and muddy from our ass-over-teacup tumble, Gary rumpled from a day at work.

The doctor delivers what he clearly considers to be a real knee-slapper. “What are you guys? Rock stars?”

We’re all briefly frozen by this question. The three of us exchange a look, wondering who’s going to field it. “Kinda,” Gary says almost sheepishly.

The ER doctor is as taken aback by the answer as we were by the question, but in small-town Midwestern style, everyone politely soldiers on with the small talk the situation demands, at least until my arm is set.


It’s a stark lesson for me. The members of Shoes have told me repeatedly that, around here, they’re nothing special, and I admit, I wonder at a world in which the idols of my youth are merely ordinary. What kind of Greek city-state of exceptional people must this place be where a Jeff Murphy just, you know, goes to the grocery store? Or a John Murphy worries about mud on his pants? Or Gary Klebe shovels snow?
We know what rock stars look like, right? We’d certainly know if they were in the room. But in a small town, no one expects rock stars in their midst. The fact that they’re here means they can’t be anything special: if they were, they wouldn’t be here. QED.

For over three decades, Shoes have hovered (not always comfortably) between the rarified world of rock respectability and the everyday exigencies of life in the provincial Midwest. Except for one brief period in the summer of 1980, they never considered trading the string of smallish towns straddling the Illinois/Wisconsin border, strung along Sheridan Road for the bright lights of L.A., or even Chicago. “Hindsight is 20/20,” Jeff muses, “but it would appear that we made the wise decision, even though you never know what might have happened if we had made the move [to L.A.].” It’s a fascinating what if: what if what they gained in exposure and opportunity they lost in a certain purity of vision and, well, innocence?

It’s an answer I’m glad I don’t have.

I can't believe this thing is finally wrapping up. Whew!
Posted by NYMary at 9:57 PM

Yay Mary - I can't wait to read this! I've loved these guys since the day in 1979 that the record store I worked at got their one copy of Present Tense and we decided to just put it on for all to hear.

I'm keeping track of the book on your FB page and sending you encouragement for the final push.
-Andrea O.

They did the right thing. Looked at objectively, the Shoes have enjoyed precisely the level of success they had any right to expect -- including having what seems to be a very good book written about them by a devoted fan. Its success on a livable, human scale.

Being from Zion IL they got shit-loads of press; if they were coasters they would have gotten lost in the shuffle.

It's funny to remember back then how the Chicago "club bands" hated them for getting a record deal without playing out.