From 1995, please enjoy Stop -- featuring Joey Ramone's younger brother Mickey Leigh on guitar and vocals (he wrote the song, too) -- and one of the great lost singles of its decade.

From the album Never, as you can plainly see. 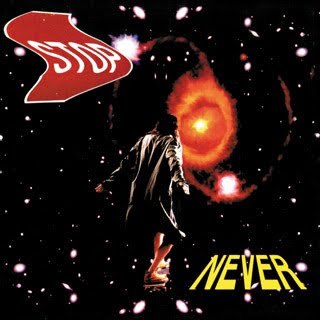 As I seem to recall saying in a review at the time, this is essentially what the Ramones would have sounded like with a more interesting guitarist. For example, that Keith Richards-ish "Before They Make Run" slide solo (introduced with "Let's give it to them!" no less) that materializes, unexpectedly, in the last third of the song is just so cool.

In any case, as always, a coveted PowerPop No-Prize will be awarded to the first reader who gleans the clip's relevance to the theme of tomorrow's Weekend Listomania.
Posted by steve simels at 7:24 AM

Of course, after Mike McGear the pickings get rather slim....

Which would rule out things like Wilson Phillips (as I'd argue they are more-well-known).


(Or it's something not as obvious like "one word song titles from one word album titles by bands with one word in their names...)

Okay -- this has proven to be harder than I'd anticipated.

Clue: It has something to do with something that Leigh did, not necessarily musically.

I know the answer to this because Google Reader published your Friday entry at 2:12 p.m. Thursday.

Or I'm seeing into the future.

I feel empowered either way.

People who played in bands with rock critics? (i checked his website.)

I know the answer to this because Google Reader published your Friday entry at 2:12 p.m. Thursday.

I was checking the layout -- Preview sometimes doesn't get it right.
:-)

Songs by people that slept with Joey Ramone?

Steve -- make no mistake: you thought it was the Preview function.

But ¡barangus!™ actually can see into the future.

He predicted my dissolute life upon our introduction in 1983. . . .

"Atlantic City"
Watching her at the window.
To be a lemon!