Bad Career Move of the Century

Well, it looks like history could have been changed in unfathomable ways if only somebody had looked in their mailbox. 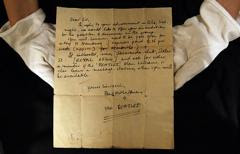 LONDON Oct. 17, 2011 (AP) -- Somewhere, an aging drummer (identity unknown) is probably still kicking himself. A newly discovered letter found folded in a book at a Liverpool yard sale has shed new light on the Beatles' early days, revealing that Paul McCartney offered an audition to a mystery drummer in 1960, just a few days before the band left for a formative two-month gig in Hamburg, Germany.

The letter, to be auctioned next month by Christie's, has surprised Beatles scholars. It was written two years before the band bounced drummer Pete Best in favor of Ringo Starr, who arrived just in time to help the Beatles' conquer first England and then the world, earning untold millions along the way.

The Aug. 12, 1960 letter handwritten by McCartney offers an audition to someone who had advertised their availability in the Liverpool Echo newspaper four days earlier. The unsigned ad said simply: "Drummer--Young--Free."

McCartney, who was then playing guitar in the band while the late Stuart Sutcliffe handled bass guitar, offered the drummer an audition with the caveat that if he joins the band he must be ready to travel almost immediately to Hamburg. The Beatles honed their musical chops playing at low-rent clubs in the German's city's famed red-light district.

The letter is signed, "Yours sincerely, Paul McCartney of the BEATLES."

It is not known if the drummer came for an audition, and failed to impress McCartney and the others, or if he simply didn't followup. McCartney addressed the letter "Dear Sir," assuming the drummer was a young man, as there were very few female drummers on the Liverpool rock scene at the time.

Christie's spokeswoman Leonie Pitts said the auction house's Beatles experts are certain that the letter was not an early feeler to Starr, who was a successful drummer with a rival Liverpool band, Rory Storm and the Hurricanes, before he joined the Beatles.

She said auctioneers had not contacted McCartney to ask if he knew anything about the drummer who had placed the ad.

"We think he's on his honeymoon," she said. McCartney married U.S. heiress Nancy Shevell eight days ago. His representatives did not immediately return an AP request for comment.

Christie's auction house said Monday the letter would likely draw more than 7,000 pounds ($11,000) when it is sold Nov. 15 along with other pop memorabilia.

The letter was discovered by a man from Liverpool who has asked to remain anonymous. The auction house said he is a devoted collector of antique coins who regularly checks yard sales.

But I've said it before and I'll say it again -- it boggles my mind that after all these years, there's still stuff left to be discovered about the Beatles.

"...as there were very few female drummers on the Liverpool rock scene at the time."

Yes. In fact there was an all-girl band in Liverpool that made at least one album. Can't remember their name....

Plus -- there were the Honeycombs, of "Have I the Right" fame, although I'm not 100 percent sure they were Liverpudlian.

The letter itself must have an interesting story attached to it ... who kept it all these years? How did it wind up in that book?

Steve, you are of course referring to the Liverbirds!

What an unfortunate name. Sounds like a disease more than a band...
:-)

What a neat story.

This kinda confirms the Beatles' side of the story, that they were never really satisfied with Best's erratic drumming; Best always contended he was booted because he was the most popular with the girls and wouldn't brush his hair down in a "Beatles cut" after the others had adopted it.

"But I've said it before and I'll say it again -- it boggles my mind that after all these years, there's still stuff left to be discovered about the Beatles."

Hey, I thought I said that!

IAC, cool story. But what's really interesting is that it lays to rest the myth that George Martin was behind the move to dump Pete. Evidently, the Beatles were never very happy with him.

When I was in Liverpool recently and took a Beatle tour, one of the highlights was a tour of the Casbah Club which was run by Rory Best, Pete's brother.

When I asked him of the true story of Pete's ousting he said Paul was always jealous of Pete getting all the girls and the most attention (and probably the not so good drumming) as early as 1960. So I guess the letter makes sense.

According to Tony Fletcher's bio of Keith Moon, one night in the mid 60s, Moon approached the Beatles, who all were seated at a table in London pub.

Since they knew of the Who, they told him sure, sit down.

They all stared at him until Ringo said, "We've already got a drummer, thanks."

Wikipedia has Aug 12 1960 as the date Pete Best joined the Beatles. I wouldn't trust Wikipedia but I do trust Philip Norman's SHOUT which says there was no regular Beatles drummer before Hamburg. I also tend to trust George Martin, whose account it is that the Lads fired PB after GM told Epstein he'd record them with a studio drummer.
cheers

A lot of stories. No one knows the real truth. All I know is, we had them.

you woke-up me from internet sleep

The Liver Birds (pronounced lie-ver or leaver) have been the symbol of Liverpool since the 1300s. It's not surprising that a band took the name, or that later a sitcom also appropriated it.

The band of the same name were excellent, btw.