Songs for the New Depression

Finally got around to scoring a copy of Del Shannon's 1964 country album Del Shannon Sings Hank Williams, which I've been curious about for years. 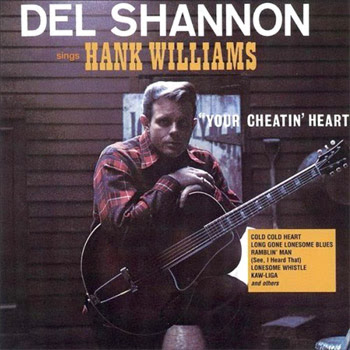 As you can hear from that version of "I'm So Lonesome I Could Cry," it's remarkably authentic for a rock guy. In fact, it's easily as accomplished as anything that was done four or five years later during the initial country-rock boom, and I include the sainted Byrds and Gram Parsons in that assessment. Shannon, of course, came to his love of the genre honestly; country was the first music he listened to as a kid and the first that he played semi-professionally.

That said, you can also hear that the above version lacks the profound ache of Hank's original, but of course that can be said of just about every cover of the song by anybody.

I should also add that "Let's Dance," the final track on Shannon's gorgeous 1991 Rock On album -- recorded in 1990, just prior to its auteur blowing his brains out with a .22 caliber rifle -- has that haunted Hank vibe in spades.

On first encounter, it seems to be an upbeat country/zydeco hybrid, a party song. Listen to it again, however, and you can't miss a desperation behind the music that's almost scary. And Shannon's vocal is, unmistakably. the work of a guy with a hellhound on his trail.
Posted by steve simels at 12:01 AM

Good call Steve! I've always loved Del, ever since my Dad brought home the Handy Man LP for me when I was a wee kid, (he did a great version of that song). I had heard the previous songs from my cousins who were 4-5 years older than me. I think I wore out the Runaway 45.

Too bad he didn't stick around long enough to be one of the Wilburys. His songs on Amy and Liberty were very enjoyable. Don't forget he was the first American to record a Beatles song, From Me To You, yes very cool.

So true, Del Shannon in the Wilburys is one of the great might-have-beens. "Let's Dance" is really wild, but Del was a guy who sang even Swiss Maid with scary desperation.

Decent cover by Del. You're right about the "profound ache" thing. Hank was the master at that.

Del Shannon was one of the most consistent performers of his era. His albums were full of non-single gems. He might not have had the vocal versatility of Dion, but to put him even in that category is a tribute. Along with Dion and Lou Christie, he was a true pre-Beatles rock singer-songwriter. And if he did nothing other than cover "Tell Her No" so brilliantly, Del Shannon would be in my pantheon.

Check out his Amy single "Move It On Over" (NOT the Hank one), a crushing garage rocker.

One of my housemates worked at the day-care center where Del's preschool daughter went. She was there the day he killed himself. Very sad.

I never heard anybody cover himself better than Shannon did with the version of "Runaway" that was the theme to that TV show "Crime Story". To me, that version slays the original six ways to Sunday. And yeah, he had a hellhound on his tail in that vocal too.