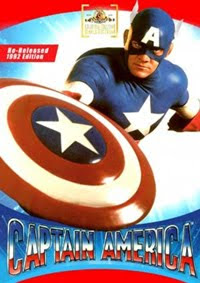 Okay, two interesting and alarming new titles have just crossed my desk from the invaluable MGM Limited Edition Collection, and I thought I'd share.

In case you're unfamiliar with the imprint, it's similar to what the folks at Warner Archive have been doing in recent years, i.e. they pick obscure but theoretically interesting films from the studio vaults -- films that wouldn't necessarily have enough admirers to warrant an official DVD rollout -- and make them available in bare-bones budget editions on a burn-on-demand basis.

The fly in the ointment -- or rather the factor that makes the whole venture economically viable -- is that the films in question are not remastered or restored; they're burned, instead, from whatever the most recent prior video master happens to be. Which means quality is hit and miss; some of them look great, some of them less so. And the widescreen entries aren't always letterboxed.

Exhibit A, in any case, is Captain America. Obviously, this isn't the not terrible 2011 extravaganza; rather it's a 1990 Cannon Films piece of crap (pardon the redundancy) directed by Albert Pyun.

Like millions of other folks, I didn't see this back in the day, but I must confess to a certain fondness for its auteur, who happens to be one of the four most heinous living filmmakers, after Jess Franco, Jim Wynorski, and the Spawn of Satan himself, Michael Bay (who at least isn't as prolific as the rest of them).

As for Pyun's Captain America, it has a pretty decent cast -- dependably hissable Ronny Cox, Ned Beatty, Michael Nouri -- and star Matt Salinger makes a believable pre-super powered Steve Rogers without the benefit of the CGI that converted Chris Evans into a 90 pound weakling in the 2011 version. Unfortunately, Pyun's film also features perhaps the least convincing mutant monster lab rat in film history, and after that I can think of very little else to say in its behalf. 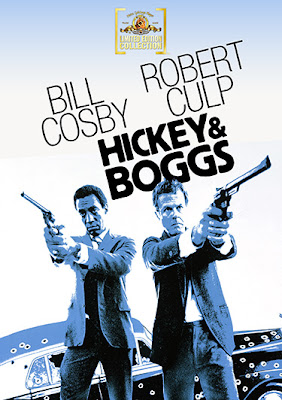 Fortunately, Hickey and Boggs -- the 1972 urban film noir directed by Robert Culp and starring its auteur and his I Spy pal Bill Cosby -- is a genuine knock-out. Culp and Cosby, whose chemistry is if anything even more palpable than in their TV days, play a pair of down at the heels hard-drinking private eyes who get involved in a search for a missing girl. In classic noir style, nobody is who they appear to be, and the whole thing gets positively existential by the end, with a body count to rival a slasher movie and an extremely dark windup.

Fledgling scripter Walter Hill's screenplay didn't really click with critics in 1972, but in retrospect it's obvious he got the seamy underbelly of Los Angeles exactly right, and there are some fabulous character parts (a young Michael Moriarty is memorable as a small-time hood, and Rosalind Cash is aces as Cosby's ex-wife). This is, in sum, one of the most underrated movies of the 70s, and if there's a Cult Film God in Heaven, the occasion of this new DVD will bring it to the wider audience it so richly deserves.

Here's the trailer to give you an idea.

Alas, the new DVD version is not, as it claims on the box, in widescreen, but the print is otherwise fine.

In any case, you can order Hickey and Boggs -- and Captain America too, if you're somewhat perverse of eyes and ears -- over at the MGM/Amazon website here
Posted by steve simels at 7:53 AM

I remember seeing Hickey and Boggs at the tender age of 11. My friend and I loved it, but what did we know? We were 11.

Sheer nostalgia almost makes me want to get the H&B DVD, but honestly, my visceral disdain nowadays for all things Cosby prevents me from doing so. I'm a pretty forgiving guy, but Mr. Cosby will be forever damned in my eyes, thanks to that hideous pukefest of a "sitcom" that he foisted upon an inexplicably grateful public back in the '80s and early '90s. Don't get me started.

I know what you mean about Cosby's career post this,but at this point he was still great.

And Robert Culp is, for me, the coolest guy who ever was, in perpetuity.

Yeah, Culp was coolness personified. And Cosby really had potential back then, even if his stand-up was always confoundingly (is that a word?) unfunny to me. But if there's the off chance that Cosby could make a nickel off my purchase of this video, then I simply can't bring myself to do it.

For some reason, being reminded of H&B after all these years got me to thinking about the Billy Jack movies. I guess they were contemporaneous. Now THERE was cinema!