Bringing Down the House: Adam Marsland 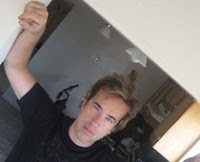 Spent last night at a house concert with Adam Marsland.

Marsland was the frontman of the late 90's critical darlings Cockeyed Ghost, whose truncated career is a tragedy, if not on the level of Big Star, then not far below it. Enjoy here their moody, melodic paean to the twilight state of transition, "Ludlow 6:18."

(Marsland's Best Of is called Daylight Kissing Night, from this song. Review here.)

Marsland then went on to a series of solo projects, including playing keys for Stew's The Negro Problem for a time, and basically just busted hump playing on his own any damn place that would have him, and making a living in the LA scene.

But I have a bone to pick with his online biographers. Marsland most certainly did not "grow up in California." He grew up not 40 miles from where I now sit, in chilly, gray upstate New York. We went to the same college (at the same time, for one semester), and the earnest garage band I ran sound for (they called me "Sound Chick" and it never occurred to me to be offended) played all the same venues in the same crappy small town as Marsland did when he was starting, with all the drama and petty politics and grudges that such a scene engenders. The smaller the stakes, the larger the investment. I didn't know him then, or at least I don't think I did, but we knew all the same people at the same time, so it's possible that we met at some point without remembering it. By the time he went to California, he was in his early 20's: still plenty of growing up to do, of course.

In any case, I'd heard his work on and off over the years, and I knew he was My Kind of People, so when I saw somewhat accidentally that he was going to play a house show in town, I leaped at the chance to attend.

House shows by their nature are peculiar affairs, oddly intense and intimate. And Marsland gave an astounding performance, by turns funny and serious, self-deprecating and thoughtful about his experiences. He did what he called "the singer-songwriter thing," providing context and descriptions for every song, welcoming all of us, the people he'd known for years and the ones who only knew his music, into the narratives of his songs and his life. It was pretty incredible.

He did a few songs from the Cockeyed Ghost catalog, like "Ludlow 6:18" and "Big Big Yeah," and a few from 2004's You Don't Know Me, including the incomparable "The Big Bear." (Actually, his performance last night was pretty close to this one here.) There was also a sturdy selection from the double concept album, 2009's Go West. (I was particularly taken with the acoustic rendition of "Half Life.") A further handful from the pissed-off road album Hello Cleveland (written over a few days, recorded in under eight hours), impressed my spouse, who still prides himself on a certain retention of his adolescent sensibility. "That's punk rock," he said, in an awed, serious tone.

I had been excited for this show. Marsland did not disappoint.

And he was pretty damned versatile. As the show wound down, he turned to the piano in the living room, noting jokingly that he has transposed some of his keyboard-based songs to the guitar, not realizing there would be a piano. He asked for requests: not just his songs, anything. Riffing off an earlier performance of Marsland's "The Night I Bought Micky Dolenz a Beer," someone asked for "The Porpoise Song," and damn if he didn't pull it out of his ass. Several Elton John songs followed, and a dreamy rendition of "God Only Knows," back on the guitar.

We hung out for a while afterward, rehashing our small-town scene from 25 years ago with a few other key participants, and talking about his role in the golden bubble of time and energy that was Poptopia. I haven't felt so energized in ages, and my thanks go out to Chris and Crystal, our lovely hosts, for allowing us the opportunity to hear this terrific performer.
Posted by NYMary at 9:45 PM

I'm actually surprised I've never heard the phrase before, and this despite having met several women to whom it might have accurately been applied.
:-)

Anyway, this guy sounds interesting, which is to say a fitting subject for future research.

Adam is a friend. I'm passing this write-up along to him, if you haven't already.

If I had a dollar for every time I played "You Don't Know Me," I'd be retired.

I played drums in a band of childhood friends back in the early 80's. We submitted a track for a contest that the Binghamton radio station WAAL were running at the time where, if they liked the song...would end up on a record (yep...vinyl) including a ballot to vote for your favorite. Adam had a song on it "What Am I Gonna Do" in which he played and sang everything. It was the best tune on there, and I was impressed forever that one person could build and sing a whole track... (one day I would try it myself!) Neither one of us won the contest...

Anon, who did you play with? I ran sound for Public Welfare, who, as I note, were very.... earnest. Not that that's a bad thing, until and unless it becomes pretentious.

Thanks to your post, the video, and a couple of Youtube submissions, including "Kickass Life", I have now ordered a copy of Daylight Kissing Night.

Mary, the name of the band was "Airborne". Very original...I'm not taking credit for that. It was in '82 and '83. We kept it going into the mid 90's. As it turned out there was another 'pro' band going by that name in and around that time. I've never heard them but by the looks I would guess some form of hair metal. We played with a lot of bands at different events at the time but I don't recall "Public Welfare". I'm guessing that's when you earned the SoundChick moniker.