Actually, something even rarer, that I frankly didn't even know still existed.

That's The Record King, at 303 Main Street in Hackensack, New Jersey, more or less just around the corner from where I grew up. I noticed it a couple of years ago when I moved back to the old neighborhood, and I've been meaning to stop in ever since, but it took me till yesterday to finally check it out.

Bottom line: I haven't seen so much vinyl in one place since the last time I was in John Swenson's loft. (An obscure rock critic reference -- sorry).

In any case, I chatted with the proprietor -- The Record King himself -- and he told me that he has been in residence at the place for 30 years, but that the store itself has been there since the early 60s. This blew my mind, because I don't remember it at all. And I spent a great deal of my teenage years on that very block, where the now vanished Fox and Oritani movie theaters used to be. (The Oritani, you may recall, was the venue where the young me first viewed The T.A.M.I. Show). 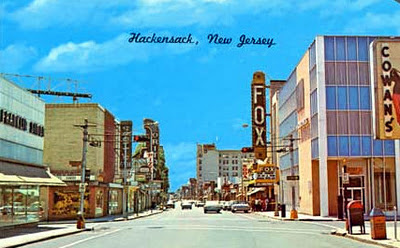 And my mind was blown yet again when I mentioned this to a certain Shady Dame of my acquaintance, who also grew up in the neighborhood, and she instantly remembered the place. In fact, she informs me that she purchased a (what would now probably be quite valuable) promo copy of The Spencer Davis Group's "Gimme Some Lovin'" there a week or two in advance of the single's official release in the fall of 1966.

Anyway, a very cool establishment. If you're in the neighborhood stop by; besides more LPs and 45s than you can shake the proverbial stick it, they also have some very cool T-shirts [two words: Palisades Park] and all sorts of interesting vintage stereo gear and other obsolete technological marvels.

Or simply check out their website at www.therecordking.com for more info. And tell 'em PowerPop sent you.
Posted by steve simels at 9:05 AM

Hackensack rocks!!! Did you ever check out the Ling? - the WWII submarine tethered right there in the river? Something to do with a certain Shady Lady on a rainy day....

There's a submarine in Hackensack?

This I gotta check out...

I don't know if I still have that Spencer Davis 45 ... but I remember hearing the opening of that record on a car radio and knew I HAD TO HAVE IT RIGHT NOW. I cajoled the guy behind the counter into selling it to me. I also wore out the LP when it came out.

Although I always wondered: who the hell names a kid "Muff"? :-)

And that Franklin Simon was a really classy store. I got a lot of clothes there, including a really cool pair of bright green shoes.

You seem to forget we went to "The Record King" in 1969 to buy Abbey Road the day it was released.

I think we liked it.