The astoundingly great Television and "Venus de Milo" live in Brazil in 2005. 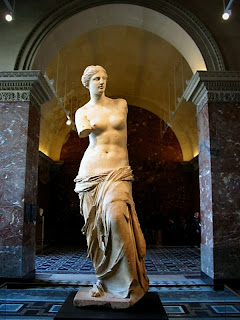 It is one of the great regrets of my life that I have never seen these guys perform.

Well, actually, I saw an early CBGBs gig when Richard Hell was in the band, and boy did they suck.

But the incarnation of the band in the clip above is beyond transplendent.
Posted by steve simels at 9:26 AM

I saw their first reunion tour in NYC in 1992, which was amazing (and where I realized that I was so in thrall to the guitar-playing that I had failed to notice what an incredible drummer Billy Ficca is). I saw them again about 10 years later, and they were really uninspired and boring. I saw them again in 2007(?) in Central Park at their first show without Richard Lloyd, and I hate to admit that they were very good (I think Verlaine took it up a notch because he was glad not to share the stage with Richard anymore).

Until I got the Live at the Old Waldrof bootleg in the early 90s (prior to the official Rhino version) I had always considered Ficca the weak link.

I have no idea why, because he's absolutely incredible.

Saw them at the Bottom Line -- 78 or 79? The music was just incredible, but I remember thinking how weird it was that Verlaine and Lloyd didn't look at each other once the whole night.

Of course, a week later they announced their break-up in the Village Voice. That explained a lot.

Also saw the legendary New Year's Eve 76/77 show at the Palladium -- a triple bill of Television, John Cale and the Patti Smith Group. Television sucked, actually, because their sound set-up was way too small for a big theater and you couldn't hear them, just a murky noise. It was still one of the great concerts of my life, though.

I had forgotten how much Richard Lloyd was responsible for the sound of the band.