Songs I Wish I'd Played Live in a Band (A Mini-Series): Part Four -- Creepy Old Guy on Drums Edition!!

From 1968, it's the surprisingly underrated (and ripped-off by Jimmy Page for crissakes) Spirit and their classic single "I Got a Line On You."

Another more or less perfect record, I think; if memory serves, the Floor Models may have jammed this in rehearsal at some point, but for what ever reason we never worked it up to completion, which is a shame, as it would have gone down a storm on stage, I suspect.

In any event, I've dug the song since the album it was featured on -- The Family That Plays Together -- arrived for me to steal it from my college radio station. I particularly love the guitar solo which -- unless my ears deceive me -- allows Randy California the rare opportunity to showcase his surf music roots.

Saw these guys at the Fillmore in 1969 -- on a bill with The Kinks and The Bonzo Dog Band (and yes, those WERE the days)-- and they were a ferociously good live band. Their secret weapon, of course, was drummer Ed Cassidy... 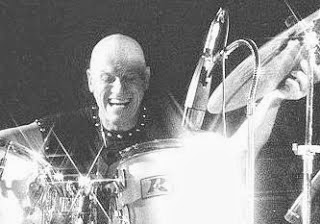 ...a former be-bop jazz guy who was unimaginably older than the rest of the band, having been born in 1923. What an interesting cat he must have been to be able to straddle such different musical and cultural worlds so easily. Wiki informs me that he died just last year, at the ripe old age of 89, which must be some kind of a record for a rocker.

Steve- Lucky you , I only saw them once - with the Staehely brothers on the Feedback tour - on a bill with Dr. Hook and the Guess Who. Family has always been my favorite Spirit album.

Lest we forget the odd factoid that Ed was Randy's stepfather which, I have always assumed, was the source of the album title. Great band in their prime.

Everyone know how Randy got California for a name?

The stage name "Randy California" was given to him by Jimi Hendrix to distinguish him from another Randy in the band (who Hendrix dubbed "Randy Texas").

Spirit blew The Kinks out of the Fillmore East that night. I became a huge Spirit fan because of that performance.

Well, in fairness, the Kinks were legendarily bad on that 1969 tour. The word most people used to describe their performances -- and you can find the Fillmore West show online -- is "disastrous."

I think another perfect tune is Talk Talk but Music Machine. I think the guy rehearsed it 8 hours a day to get it tight. The rest of the band couldn't take it would be my guess.
DannyGuam

Back in the '80s (I hate writing THAT) I saw a video of RC doing this tune with a studio full of guitarists, a dozen of them at least. Anybody seen it? Know where it can be found? I've been looking ever since....