Songs I Wish I'd Played Live With a Band (A Mini-Series): Part Two -- Why Are There So Few Jews in the Music Business?

From 1965 -- a year that is to pop and rock singles what 1939 was to the movies -- please enjoy The Hollies and the Graham Gouldman penned classic "Look Through Any Window." 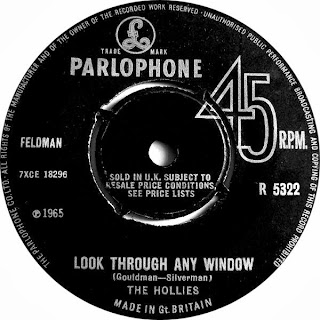 One of the first songs I suggested The Floor Models cover was The Hollies "Bus Stop," (also by Graham Gouldman), and the fact that we did it pretty well was one of the hugest thrills of my adult life (although to my chagrin, no live version of it seems to have survived). However, for years afterwards, we toyed with the idea of working up LTAW, which if truth be told I think is the better song/record.

I mean, that classic electric twelve-string riff by the vastly underrated Tony Hicks, those harmonies, and that incredible bass and drums lock on the modulation near the end (BTW, that's Hollies original five-string bass player Eric Haydock; when he departed, much of the band's instrumental fire power departed with him).

In any case, just a brilliant record; for me, at least, it has always seemed like the quintessential British Invasion single that wasn't by The Beatles.

I should add that the stereo version above is from the early 90s remix done for the Hollies 30th anniversary box set; if you have a stereo version that predates it, just delete it now, because it's fricking unlistenable.

As a kid, LTAW was the very first record I bought. I still have the well-worn 45. Great song.

I confess I don't really get the Hollies (except for "Long Cool Woman"); maybe I'm back-projecting onto the Hollies how gruesomely bad Graham Nash's songs for CSN(Y) would be ("Our House" and "Teach Your Children" being, for me, the very definition of treacly).

But the Hollies get played a lot on my favorite Sirius/XM channel (Underground Garage); maybe I'll listen harder...

The Hollies were great - but as the 60s wore on and they remained essentially a singles band in the album era, it got hard for them to get the recognition they deserved.

As for Graham Nash's post-Hollies career, I understand how his hippie earnestness could grate (just like a lot of people were turned off by Patti Smith's over-the-top messianic I-am-an-artist-exclamation-point attitude in the mid-70s) but when it works (his first solo album, for instance), he can be simply wonderful.

Love, love, love this song --- along with most of the Hollies' other hits, "Pay You Back with Interest" being another one that just kills me.

And yes, the early stereo release is unlistenable.

Have to say, what sold me on the song was the drumming of Bobby Elliott. Here's a live performance: http://youtu.be/F1E-9ZwoKnA

What I can't believe is that Hicks and Elliot didn't show up for the Rock+Roll Hall of Fame induction ceremony because what was left of the Hollies, who are still touring, had a gig that night! Shouldn't that be a reason to take a night off?

Back in the day, Steve, who knew how much I loved the band, got me tickets to see them in NYC. When I got to the show, there was some Swede singing lead vocals instead of Alan Clarke! They were still real good though.

Saw them with Rikfors, and a few years later when Clarke rejoined. They were great both times.

Incidentally, there's some great live stuff with Graham Nash from 1968 on the most recent Hollies box set.

Hey, Steve: Thanks for posting "Look Through Any Window". Love that song.

By the way, I noticed a couple of things:

1: That particular recording of the song is both mono and stereo. The vocals are stereo, but the backing track (i.e., guitars, bass, drums) is mono.

2. Bassist Eric Haydock missed a note at 0:18. I never noticed that before.

And a slight clarification: You alluded to Eric Hayodkc's bass being a five-string. He actually played a Fender Bass VI, which has six strings.

Thanks for the correction about Haydock. As a bass player, I should have known that.

Oops. I'd like to offer an apology to Mr. Haydock for misspelling his last name in my previous comment. Sorry, Erci!

As far as I remember, a Fender Bass VI was what John Lennon played in the film clip of "The Long And Winding Road" from the Let It Be movie. Hang on...

(Plus, this page dedicated to the instrument says: "Both George Harrison and John Lennon used the six-string Fender bass on the White Album, Let It Be, and Abbey Road...".)

People with their shy ways! and their sly ways!