Searching for a Decent Backup Group

Saw Rodriguez at Radio City Music Hall last night and was not disappointed. The guy is a little frail at 71, but he has charisma to burn -- he ambled on stage wearing a long black leather coat, shades and a top hat, looking for all the world like a sort of zen version of Slash crossed with Cousin Itt... 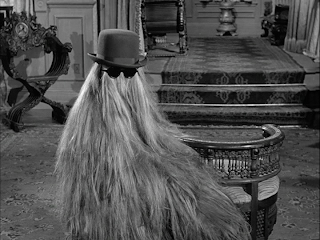 ...and he's a terrific interpretive singer to boot; high points of the show, for me anyway, were absolutely gorgeous covers of "Fever," "I Only Have Eyes for You"(!) and "Love Me or Leave Me"(!!).

However, unlike his performance on Letterman earlier this year...

...his stage band sucked on ice. Really. Not enough to sink the show, but close.

In any event, the songs from his two albums were still riveting, and Rodriguez himself -- which you already know if you've seen Searching for Sugarman -- is a very funny guy, in a wryly ironic way; at one point he told us that he "wanted to be treated like an ordinary legend."

I should also add that during the aforementioned covers, it finally dawned on me who the guy most reminds me of.

...the incomparable Chris Montez. Their voices aren't all that similar, but the phrasing is.

1) Any idea who was in the band last night?

Nope, but they reminded me of some of the crappy pickup groups Chuck Berry used to tour with. The drummer was a refugee from a twist band.

In the posted photo, I recognize the four semi-famous guys in the matching suits, but who is the guy seated in the bottom right corner of the photo, next to Montez?

I'm not sure. It mighty be Duane Eddy.

Steve,
Thanks for the ID on Tommy Roe. If you don't already know it, check out his hauntingly beautiful song from 1967 called "It's Now Winter's Day". Although it seems to have been largely forgotten by oldies radio, at least where I live, it was actually a fairly big hit single at the time (US Top 30) and was produced by Curt Boettcher, who had just recently finished producing some tracks for the Association, most notably "Along Comes Mary". J. Lag

I will check that song out post haste; thanks for the tip.

How was Susan Cowsill?

Chuck berry didn't "tour" with a pickup band, it's a pickup band because it's different guys every night. According to this article http://www.rollingstone.com/music/news/rodriguez-10-things-you-dont-know-about-the-searching-for-sugar-man-star-20130328 Rodriguez does the same thing - though he also states that he has great musicians in all his "bands" so...

I apologize for the inapt phrasing.