From 1979, please enjoy -- if that is at all possible, given the Ignoble Frog's perennial problem as suggested in the question above -- the charmingly monikered first generation French punk band The Stinky Toys... 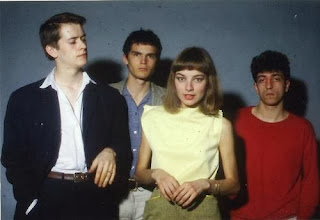 ...and their equally charming "Birthday Party."

I know what you're thinking -- who knew there even was a first generation French punk band? Well, in point of fact, these kids actually shared bills with the likes of The Clash, The Damned, The Buzzcocks and even, yes, The Sex Pistols. They never made much of an impact in the States, unfortunately; back in the day I actually bought an import copy of the album this is from strictly because I thought their name was just hilariously representative of what a bunch of Frenchies would think was cool and punk.

Incidentally, adorable ST lead singer Elli Medeiros went on to star in a host of flicks since the late 70s, including, most recently, Pablo Trapero's powerful 2008 Argentine slice of prison life Leonera. After that, or so Wiki informs me, the rest is silence.
Posted by steve simels at 4:17 AM

Makes you appreciate Debbie Harry. Does have a bit of catchy charm.

She was very easy on the eyes, that's for sure.

Also the guys have the right guitars.
:-)

She's nice, music boring. But they all play Rickenbackers which is cool.

Which begs the question "Can Belgians rock?"

That girl's looks, outfit and sinuous moves make up for a lot of shortcomings. I like the song better than anything the Damned did. I like 'em.