Songs I Wish I'd Played Live in a Band (A Mini-Series): The Final Chapter -- Dream On, Pal, Like THAT Was Gonna Happen

From 1977, please enjoy Television and one of the most exciting rock records of all time, the incomparable "See No Evil." 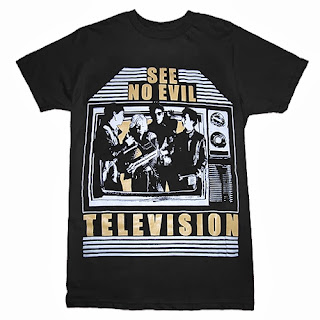 The Floor Models absolutely loved -- nay, lurved -- Television, and we actually did a pretty good version of "Ain't That Nothing," from their second album, but "See No Evil" was the song we would have KILLED to cover. The reason we didn't is because we couldn't figure out how to play the signature riff Richard Lloyd is doing on the right channel, and frankly I've never met a guitar player who could do it, either. The rest of the song is pretty great as well, including that gorgeous Tom Verlaine solo on the left channel, and of course the whole thing just rocks like a mofo.

It was received wisdom among rock critics back in the day that Television was essentially The Grateful Dead of punk, because they, y'know, featured long guitar jams. But that was always hooey, IMHO.

With the kind of metallic guitar attack you hear on "See No Evil," the only analog that makes any sense is The Yardbirds. It's that kinetic and that great.

Television's "Marquee Moon" is simply one of the best records of all time. It's a slice of perfection right up there with Miles Davis' "Kind Of Blue".
My band, Foglizard, considered performing as Television for a Halloween show, but for similar reasons cited in your post we abandoned the idea. Instead we went as Kraftwerk, and performed "Autobahn" in it's entirety.

saw the dB's right after Chris Stamey left and they NAILED this song.

Do you want the whole part or just the opening riff? I've got it maybe 2/3 figured out. Let me know and I'll send you a vid.

The whole thing, if you can, but I'll settle for the riff.

Is it open tuned?

I think it's in standard. The riff I've got. Give me a couple days for the rest. I'll get back to you....

Cool. Looking forward to it.

Thanks to someone on the Internets:

I wouldn't know a guitar tab from Diet Pepsi.

If I can't see somebody's hands moving, I can't use it.

I can read music, but not tab. I have no patience for it at all. Show me the hands.

Grateful Dead vs. Yardbirds is how I hear it, too. I love both those bands but Television didn't "noodle around" like the Dead --- when they were having a bad night, it was more effective than Ambien.

If you have trouble with tabs, this may help:

It's not the riff so much, but the song structure. I think Pat Fish must have listened to these guys a lot too.
http://www.youtube.com/watch?v=ZWA9FmNIZao
There's something vaguely Carnatic about it.

Just more good stuff I missed being a prog dipshit.