From 1997, please enjoy Jason Falkner, a gentlemen whose work I have somehow managed to miss heretofore, with a jaw-droppingly great power pop version of Joni Mitchell's "Both Sides Now."

I am informed that this is from an Australian b-side, and that it differs from the version on Falkner's 2001 Everyone Says It's On album. Whatever its provenance, however, it's just a brilliant performance -- the way each verse builds in intensity over the previous one, and those harmonies. Wow. You can hear "Both Sides Now," at last, as nature intended -- as a classic pop/rock song, finally stripped of any vestige of kitsch hippie sentimentality or artsy-fartsiness. (Yes, I'm looking at you, Judy Collins. And I like Judy Collins, but still). 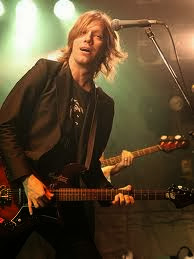 In any case, our good pal Sal Nunziato from BURNING WOOD passed this along to me last week, and I am forever in his debt. Sal says it's pretty much his favorite cover version of anything ever; I won't go quite that far, but it's certainly now my favorite Joni Mitchell cover of all time (the previous champ in that regard, BTW, was a tie between The Byrds' "For Free" and Nazareth's "This Flight Tonight.")
Posted by steve simels at 9:02 AM

The version on "Everyone Says Its On" feels more like a demo. Less harmony, not as layered. Inferior.

Why does this man not tour? (Or does he, but he never hits where I live?)

Shriner, to my knowledge, he's played twice in NYC. Once in 1999, which I attended and once about 6 years ago on a Monday night in a tiny room caled Piano's at midnight. He is all over the place though. Currently in Beck's touring band, toured as a Cheap Trick sideman a few years back.

You're overrating the track. It's good, nothing special.

I listened twice, just to see if it would stick, it didn't.

Upon a third listen: Very energetic, but doesn't hit below the surface.

I believe this version of "Both Sides Now" to be far superior to Mr. Faulkner's, who I think is quite talented.

Davy Graham, from 1968. Another victim of Jimmy Plagiarist.

A couple of quick tips on Faulkner:
1) He was a member of the Grays, whose lone album (Ro Sham Bo, from 1994) is worth checking out. One song from that album, a track called "The Same Thing", appears the 90s volume in Rhino's "Power Pop" series.
2) He plays a lot of guitar and other instruments on Eric Matthews' sublime first solo album, It's Heavy In Here, on SubPop, from 1995.
J. Lag

He was also in Jellyfish.

1)In my previous post, I forgot to put an "on" after "appears" - sorry, I was rushing.
2)I'm not saying it's a definitive re-imagining, but another cover that I quite enjoy of a Joni Mitchell song is Fairport Convention's version of "Chelsea Morning", from their first album (1967), before Sandy Denny joined the group. (They also do Joni's "I Don't Know Where I Stand" on the same release.)
J. Lag

I'm a big fan of his (and of Jellyfish, and of The Grays lone release), but this had escaped me previously. Thanks!

Hi Steve -
Geez, this is awesome. been listening to it LOTS since you posted. THANKS!
And thanks to J.Lag for the extra info -

Any recommendation for purchase - Grays lone album, or a solo Falkner album?

This is terrific. Thanls for turning us on to it. I haven been knocked out by his stuff before but will revisit in hopes that some of it is half as good as this.

He really shines as a guitarist and vocalist on the Bellybutton part of the Jellyfish box set. Next for me is Necessity-The Four Track Years. Stunning stuff.