Your Tuesday Moment of Words Fail Me: Special THIS is Brit Pop! Edition

From German television in 1967, please enjoy the original five piece lineup of The Move... 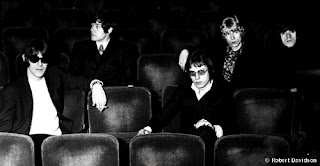 ...with astounding performances of "Walk Upon the Water," "I Can Hear the Grass Grow" and "Night of Fear."

I think I may have posted this here six or seven years ago, but it had apparently vanished from YouTube for a while, so when I stumbled across it the other day I figured it was time to re-up.

About the band, I can only say a) it's a major cultural crime that these guys never played in America (or got any airplay) at this point in their history and b) they're fucking fantastic. The only group of the day I can think of with this much raw talent and a front line with four strong voices was Moby Grape.

On the other hand, watching lead singer Carl Wayne's stage shtick, with the benefit of hindsight, it's not really a surprise he nudged, briefly and disastrously, the band onto the cabaret circuit or that he eventually wound up doing musical theater and more or less disavowing his rock career.
Posted by steve simels at 9:17 AM

In addition to the front four, Bev Bevan was one of the best drummers around. No great band isn't driven by one.

Some random thoughts on the Move:
1)I agree with the previous comment. Bevan is a great player.
2)Their late-60s song "Omnibus", which wasn't a 45 in the U.S. but was (unusually) a (flop) single in the U.K., is one of my all-time favorite British rock songs (the harmonies on the chorus! the chording! the explosiveness!)
3)If you want to hear a fun "live" release by the group, check out a CD called "Something Else...Plus". From a 1968 concert, it's a covers-only set that features versions of the Byrds' "So You Wanna Be a Rock-n-Roll Star", Love's "Stephanie Knows Who" and Jerry Lee Lewis' "It'll Be Me", among others; the label (Diablo, part of Demon/Edsel, from the U.K) added four bonus tracks on the CD. Although apparently the band later re-dubbed the vocals, it doesn't detract from the power of the performances.
4)About a decade ago, another U.K. label (Castle) released a "lost" solo album ("Ace The Face") by Move member Ace Kefford on CD. Although Castle is now (sadly) defunct and the CD is consequently out-of-print, the material from it may be downloadable, and it's definitely worth checking out. I was addicted to "Oh Girl", the opening track, for weeks when I first got this release.
J. Lag

I actually had a copy of the Something Else EP. Found it at a small record store in the Village in the mid-70s. I thought I'd died and gone to heaven.

I believe Carl Wayne replaced Alan Clarke as the Hollies lead singer in the 1990's until his death about 10 years ago.

This is damn good.

What a find! Been a big The Move fan since high school. (which is more years than I'll admit to here).

So glad to discover your blog.

Also, if it's not too late, be sure to visit the Catacombs of Paris. The City of the Dead. I've been there once, and it was the highlight. For Reals. The bones of some six million corpses artistically stacked in mine shafts some 1/4 mile beneath the city streets. I posted some pics a couple years back.