Here's a possibly -- hell, probably -- apocryphal story I've been meaning to share for a while.

But first, from 1958, please enjoy Richmond, Virginia's Rock-a-Teens and their great "Woo-Hoo," perchance the most sublimely stupid (or stupidly sublime) rock record of all time. 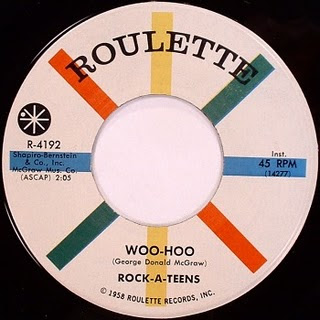 I don't know where to begin singing the praises of this one. Maybe the trash-can drum solo, which of course has never been equalled. Or maybe the lyrics themselves, which I reproduce here in their entirety, secure in the knowledge that the poetry survives the leap from the original magnetic tape to cold hard type here on the Intertubes.

The song itself is long since immortal; Quentin Tarrantino used a cover version, famously, in Kill Bill, and both the original record and several punk remakes of differing levels of manic intensity have shown up frequently in TV commercials over the last few years. I myself love it in all its permutations, obviously.

As for that possibly/probably apocryphal story -- it was relayed to me in September of 1965, during my first (and only) semester at Lake Forest College, by my long time chum Eric C. Boardman, who lived in the dorm room across the hall.

Anyway, as I heard it, the previous summer, one of the Chicago area AM radio stations was going to change formats (from Top 40 to something else, if memory serves). To publicize said switch, in the week leading up to the change, the station played nothing but -- you guessed it, "Woo-Hoo" by the Rockateens. What made it devilishly delicious, however, was that they would continually ID the song as something else, as if they were airing their normal Top 40 playlist, i.e. a deejay would say "And now "Here's 'Wooly Bully' by Sam the Sham and the Pharaohs," and then on would come "Woo-Hoo." And then "Here's 'Help' by the Beatles," and on would come "Woo-Hoo."

Apparently, as I said, this went on for an entire week with everyone at the station gleefully deadpanning about it, including the receptionists at the station's switchboard who, when fielding the inevitable listener inquiries the prank engandered, would simply say "Yes, that was "Like a Rolling Stone' by Bob Dylan. Thank you for calling."

In fact, if Eric is to be believed, by the end of the week the "Woo-Hoo" thing was such an underground cultural sensation that you could see cars stopped at red lights all around Chicago, with everybody's windows rolled down, "Woo-Hoo" blasting from their dashboard radios, and the car's occupants convulsed in laughter and waving to each other.

Like I said, this is a probably apocryphal story, but I like to think that it did, indeed, happen. Certainly, it should have.
Posted by steve simels at 12:00 AM

What a treat! Thank you, Steve.

Hey, we suddenly lost T. Bone Wolk. What a shame.

Funny you should say -- while I was getting this together, it suddenly dawned on me that "Paralyzed" sounds suspiciously like this....

This is the first time I have heard the original. It has a much sweeter approach than the 5,6,7,8's version.

I agree with TMink - I like this version and all I knew of the 5.6.7.8 version was the damn loop they played on the Vonnage commercials - I HATED that and would turn the channel whenever it came on. Took me a long time to figure out what Vonnage was selling cause I did not want to hear their commercial at all. IF they had used the original and not sampled such a small piece, they might have had me.