It Came From the Basement!

Okay, and at the risk of getting even more self-indulgent than I usually do around here, I have a confession to make. At some point in the 90s, when I started hearing about Guided By Voices, and their whole recorded-at-home-on-a-Portastudio, low-fi esthetic, I got pretty cheesed off, frankly.

The fact is, my high school garage band chums and I -- under a variety of different monikers, although we finally, and I think appropriately, settled on The Weasels in perpetuity -- spent most of the 70s making defiantly low-fi DIY powerpop albums in a dank Jersey basement. I mean, really -- Guided By Voices were great and all, but The Weasels had already accumulated a massive body of poorly recorded work years before that Robert Pollard poseur even had his first beer hangover.

Credit where credit is due, for crissakes.

Anyway, as I've sort of been hinting in this space for a while, I recently re-hooked up with my Weasel colleagues (who I hadn't seen or worked with in at least two decades) and as a result I came into possession of a digitized version of Crimes Against Nature (1975), our first "official" album -- and by official, I mean the first one not recorded under completely primitive circumstances, i.e. on Edison wax cylinders. I hadn't heard it in I don't know how long, but to my relief I found most of it quite charming, so I thought I'd share.

Here's the title tune, sung (and written) by our multi-instrumentalist genius Glenn Leeds. The inspiration for it, as the lyrics suggest, was the purchase of a (then quite pricey) Teac four-track reel-to-reel tape deck by rhythm guitarist/vocalist David Hawxwell. Apparently, Glenn saw this as somewhat ironic given Dave's technical and musical skills, or the implicit lack thereof. 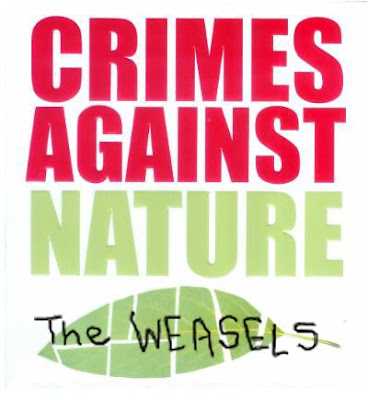 I remember when you couldn't even sing on key in the days back then
Now your voice is always perfect and you sing your vocals in a four part plan
And I wonder now and then
Has your talent so emerged?
Or are you sound dependent
On the money that you splurged?

And it's a crime
Crime against nature...

In case you're wondering, the hopelessly inadequate attempted Abbey Road-ish electric guitar fills and solo are by yours truly. Our intrepid drummer Mike Sorrentino is absent from the song; I can only assume that's because it was recorded around the time that Mike -- the only member of the band with what might remotely be described as Teen Appeal, by the way -- had informed us that "rhythm is an outmoded Western conception."

I should also add that The Weasels continued to record even more prolifically after I left the band, and they are still in fact at it. But don't worry -- I'm not going to inflict any of THAT stuff on you.

Very interesting. The song has derivative influences. Sort of a little Badfinger, I hear Signs by the 5 Man Electrical Band, and of course the dit-dits from The Beatles' Girl. And funny lyrics.

Godd diggin, that one out.

Hahaha! Steven, I think it's terrific! Great concept & a lead to be proud of!

If Guided by Voices were this good, I wouldn't resent them so much myself. Nice.

For the record, I asked Glenn 30 years ago if the song was about me. He replied: "Dave..." (knowing full well that I prefer David) "...of course not!) And I believed him. Because that's the kind of a guy I was.

The fact that the 4 track Teac broke down just a few years after this recording say all we have to know about this story.

Well, none of us is surprised by WeaselD's transparent, and sadly desperate attempt to garner some attention by once again suggesting that the song is about him. No DAVE; time to move on. It is, and always has been, about Warren Beatty...

Wow! Glenn~ I just googled you and found this! (yes I was curious) How great to hear this song again.. I remember you and the Weasels working on this song... I always loved it. It would be great to hear more of your recent Weasel Music on here someday. Or have you all launched Solo Careers? :)
Hope all is well with you and all the Weasels! sounds great ~ Karin