Brian Jones and Keith Richards of The Rolling Stones have a drink in the sun at the Jack Fort Harrison Hotel in Clearwater, Florida, late 1964. 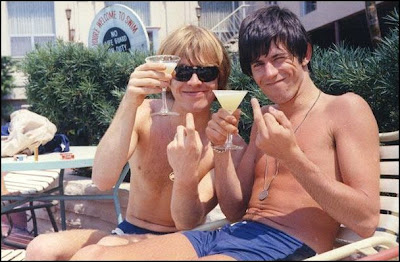 Just two young guys who have realized that yes, they're about to rule the world, sitting around the pool. Amazing.

In case you're wondering, that shot -- which says so much about how the Sixties were about to unfold it's kind of frightening -- is part of a not seen for over 45 years cache of Beatles and Stones photos taken by American tour manager Bob Bonis, who apparently stashed them in a duffel bag and forgot about them. They're currently part of a London gallery show -- you can look at a bunch more of them over here.

And speaking of the '64 Stones -- and a certain famous ode to a highway we were discussing earlier this month -- I just discovered this quite astonishing live performance (in stereo!) of said ode from around the same time the above photo was taken. 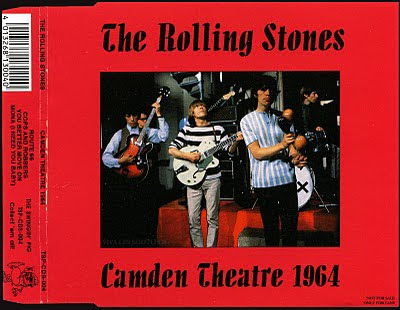 What was I saying about young guys who have realized they're about to rule the world? Seriously -- you can hear that realization and that confidence in every note here.

Love this picture of the Stones in Fresno!

I'm pretty sure that's a venue called Radcliffe Stadium - the sign on the stage is for KMAK radio, which at that time was battling it out with KYNO, the try-out station for the "Boss Radio" format.

I knew you were going to love that shot from Fresno.

That gig is actually somewhat notorious in Stones lore -- Keith talked about it in the first interview he gave to Rolling Stone.

I have a bunch of early live Stones -- '64-'67 vintage -- and they really were the world's greatest rock'n'roll band, even then.

The Beatles were more creative, even visionary, but the Stones very simply kicked ass.

Wow that is well recorded. There is some nice air around Mick's vocals, even in the mp3. And I see what you mean about their confidence.

And, thanks, Steven, for posting this cut today!

Oh yeah, they knew how good they were. Take a look at the cover photo of the first album, which was sold in England with no lettering of any kind on the front -- just the band, staring into posterity.

Very tan for a couple of Brits.

OK, gotta find that Keef interview about the Fresno gig.

Damn, they were great.

Still are, on a good night.

Now that there picture is the difference between a photograph and an electronic image. You ain't gonna find a j-peg 45 years later in your duffel bag. Great stuff!

Every time I see a YouTube vid of the Stones on some ginormous stadium stage I'm going to think about that little platform in Fresno, hung with radio station banners.

Isn't it the legend that Keef came up with the riff to Satisfaction in a Clearwater hotel, during an early '65 tour? Are we looking at said hotel, I wonder, or had they moved into more sumptuous digs by then?