Great Lost EPs of the 70s: More Songs About Revenge and Detergent

This one arrived in my mail at the Magazine Formerly Known as Stereo Review sometime in 1978. The joke may have been an obvious one waiting to happen, but I got a chuckle out of it anyway. And the guys behind the group alias turned out to have an interesting power pop pedigree. 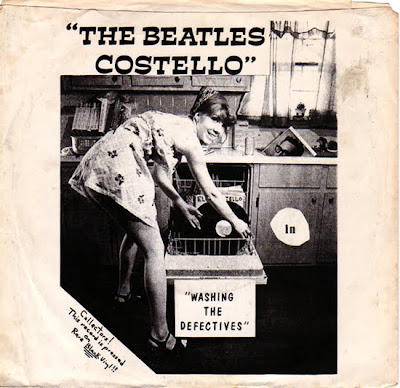 I lost the actual disc of this years ago, and if truth be told the only thing I recall about it is that it featured a very nice, Ventures-styled cover of "Theme From 'A Summer Place.'"

That being the case, a coveted PowerPop No-Prize will be awarded the first reader who can identify the artiste(s) behind the snarky nom du disque (hey -- no Googling!).

And a coveted PowerPop No-Prize and a week in Philadelphia to any reader who's got mp3s handy of any of the songs from the damn thing.
Posted by steve simels at 12:01 AM

Note to self: Completely obscure never been on CD new wave oddities not as interesting to readers as hoped.
:-)

Sorry, Steve. I knew I had no chance on this one, so I went ahead and googled it. Looks like there are copies to be had at ebay & mp3s to be listened to at various places, including a tumblr account called "power-pop."

Great name and cover, although I am bereft of clues as to those behind the enterprise.

Andy Paley. Of the Sidewinders, who I posted about a while back, and later of all sorts of good stuff, including working with Brian Wilson. And the Paley Brothers, of course.

Scroll down to hear Beatles Costello do Soldier of Love.