From 1981, and his eponymous solo album debut, please enjoy the late and heartbreakingly great Carl Wilson of the Beach Boys and "Hold On." 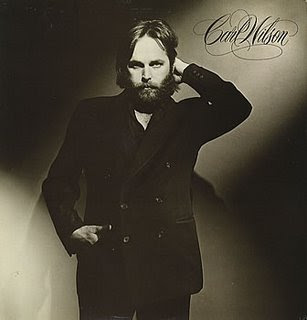 I was fortunate enough to see a club show on the tour Carl did in support of this album; it was just him and the small band you hear on the above track, and they totally kicked it. The album itself, alas, has never been on CD, and since it's never developed a retroactive cult following like brother Dennis Wilson's Pacific Ocean Blue, I suspect it never will. Yet another reason to give thanks to the intertubes, from whence I found the mp3s.

As for "Hold On," I have only two words for anybody who claims that Brian was the sole significant talent in the Beach Boys, or that said band was white bread and devoid of soul.

Pardon my French, but I believe they are "bite me."
Posted by steve simels at 7:06 AM

i totally agree. carl didn't/hasn't gotten his due because he just quietly did what he did without demanding the spotlight.

Actually, the CD was released officially in Japan, though good luck finding it now. Always loved this record, especially the two ballads "Heaven" and "Seems So Long Ago."

Just about everyone in the Beach Boys but Mike Love brought something positive to the table.

Incidentally, I have it on good authority that Mike and Brian actually did a photo shoot together over the weekend.

The wives, apparently, have been trying to get them to reconcile. With all that entails, including performing or recording at some point.

Actually, I bought sort of a bootleg twofer of his 2 solo LP's, great quality, a long while ago.

He also did a nice rockin' cover of Fogerty's Rockin All Over The World.

Mike Love did bring a little something to the table with a little ditty called Almost Summer with a side band called Celebration from a soundtrack in 1977 or 78. The name escapes me right now. I think it reached the top 30.

With all that entails, including performing or recording at some point.

Oh, lordy, lord...Isn't that one of the seven signs of the apocalypse? Seriously, I have a hard enough time listening to Brian these days (like, I'm happy he's doing well, but sheesh!). Toss Mike Love into the mix, and Cheney's gonna have a new toy in his bag of torture tricks.

The thought of Mike and Brian getting back together reminds me of the priest talking to Harold regarding his sexual relationship with Maude.

As huge a dick as Mike Love clearly is, I have mixed feelings about a reunion of him and Brian.

I mean, it's no use pretending Love didn't have at least a small hand in some of Brian's most beautiful songs.
And I'm assuming that any Brian/Mike project would also include good guy Al Jardine, who's been singing with Brian of late.

Which would make it 3/5 of a Beach Boys reunion. The New York Dolls did very well with a similar percentage....

Yeah, but Mike Love was not in the Dolls!

What gets me, aside from his abuse of Brian, is his arrogance. He is not a good singer, if he did write some of those lyrics, it was a LONG time ago, and Brian persists in spite of Mike. His whole arrogance to output ratio is way off in my book.

...it's no use pretending Love didn't have at least a small hand in some of Brian's most beautiful songs.

A very, very small hand. For which he was well-compensated, even without the royalties Murray cheated him out of.

And in return, he destroyed Brian's career.