I Got the Blues

You know, it has just dawned on me that there have been far too many Rolling Stones-themed posts in the last week or so, so this is the last one for the forseeable future, I swear. Well, at least until I find that tape of me singing "Singer Not the Song" with my crappy 70s band. Which, actually, yes, does exist, but don't worry, I wouldn't be that cruel to you.

In its place, however, here's something that, depending on your perspective, may be even worse.

From 1986 and their ultra-rare cassette-only stem-to-stern remake of the Stones classic Exile on Main Street, please enjoy assaultive noise-punk provocateurs Pussy Galore and their take on "Stop Breaking Down." 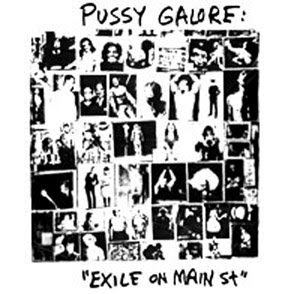 Pussy Galore, for our younger readers, was one of those artsy late 80s downtown NYC outfits that were far more influential than their actual accomplishments may have deserved, and their limited edition, deliberately unrehearsed low/no-fi take on Exile was an underground sensation that was much more talked about than actually heard by anybody. I, for one, was never able to find a copy back in the day, and not for lack of trying, but -- and god bless the intertubes -- I chanced across a download link for it just the other day.

The question, of course, is whether the thing was some sort of brilliant semiotical demystification/deconstruction of The Blues/rock stardom/blahblahblah or merely a load of obvious dogshit dished out by the band in the certain knowledge that credulous critics and assorted hepsters would lap it up no matter what. Turns out to be a bit of both, IMHO; most of the album is more or less unlistenable, to varying degrees, but some of it is actually kind of funny or at least has a vibe. The above "Stop Breaking Down" probably represents its high point, although I'm not sure that's quite the right phrase in this case.

In any event, Pussy Galore's frontman went on to form the eponymous Jon Spencer Blues Explosion in the 90s and enjoy quite a bit of commercial success with a slightly more polished version of the approach pioneered on Exile. So I guess ultimately the joke was on us.
Posted by steve simels at 12:01 AM

This was the high point?

Re: Pussy Galore - sounds like the New York Dolls on a very bad night.

By high point, I mean most of the track isn't a loud distorted buzzing, as opposed to some of the others.
:-)

steve, are you aware that Beck is doing classic album remakes with a load of guests and making them available on his own website for free download?

Yeah, I knew about that, but I don't think I've actually listened to any of it yet. If memory serves.

The Velvets could be interesting...

Wow, that was really bad. The idea was pretty cool, but not my cup of arsenic as far as the music is concerned.

Ah, the wretched excesses of the art world in the 1980s.

"A week after my drugs ran out, I left my bed to perform at the college, deciding at the last minute to skip both the doughnut toss and the march of the headless plush toys. Instead, I just heated up a skillet of plastic soldiers, poured a milkshake over my head and called it a night."

aw well, on the right night in the 80's it was obvious that Pussy Galore was the greatest live rock band playing. as good as the Stooges at their best. more 'mats than the Replacements. probably a matter of timing the drugs right.