Well, it's Friday and you know what that means. Yes, my Oriental pants consultant princess Fah Lo Suee and I will be off to beautiful downtown Fort Thomas, Kentucky and the home of Sen. Jim Bunning (R-Senile Hypocrite), where we'll be objecting to the odious little reactionary just on general principles.

That being the case, further posting by moi will have to be sporadic for a day or two.

Best or Worst Post-Elvis Pop/Rock Song/Record About Growing Up And Its Attendant Issues!!!

No arbitrary rules at all for this one, and if I've done something similar in the past I crave your forgiveness.

In any case, my totally top of my head Top Eight is:

Say what you will about this piece of crap, but it's actually so bad it makes me kind of appreciate Lady Gaga. 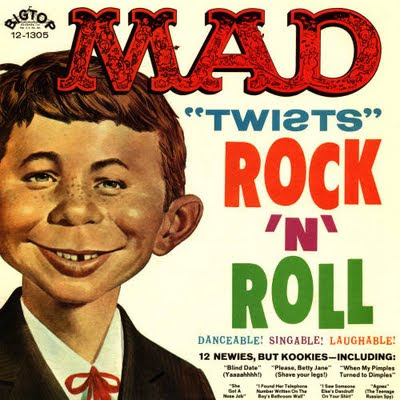 From 1962, the ultimate Clearasil classic, and I don't care that it's a genre parody -- it works taken straight as well. By the way, there are a lot of surprisingly great songs on this album; I've always been particularly fond of "Nose Job."

5. Bobby Vee and the Strangers -- Come Back When You Grow Up

This is actually a surprisingly well-written (and beautifully produced) song. Vee gets unfairly lumped in with all those manufactured early 60s whitebread teen idols, but he actually was one of the better Buddy Holly disciples. A genuine, if minor, rocker is what I'm saying.

4. The Pursuit of Happiness -- I'm an Adult Now 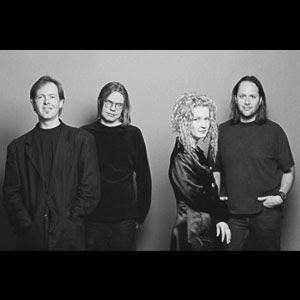 Boy, this one just resonates with me more and more the older I get. It's also, IMHO, Todd Rundgren's finest hour as a producer, as heretical as that opinion may be. 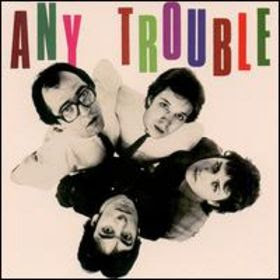 The Springsteen song, obviously; "I swear I found the keys to the universe/In the engine of an old parked car." I think we all know the feeling, but as much as I love Bruce's various versions of this over the years, I've always felt that Any Trouble owned the tune. 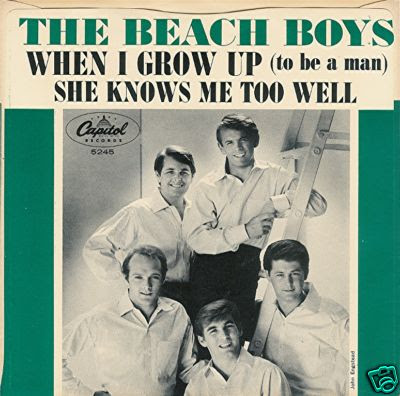 Now and forever, the most heartbreaking farewell to innocence in rock history. And by heartbreaking, I mostly mean that it makes me want to cry when I think that Mike Love had a hand in crafting anything so beautiful.

And the numero uno Getting of Wisdom song, seriously it's not even a contest and I know I say that all the time but this time it's true, is --

Thoroughly depressing and yet it totally rocks. Quite an accomplishment, now that I think of it; one of these days, I really should check out the rest of these guys oeuvre.

[Shameless Blogwhore: My parallel Cinema Listomania -- a review of the totally awesome DVD of the restored The T.A.M.I Show -- is now up over at Box Office. As always, if you could see your way to going over there and leaving a comment or three, it would help me justify my exorbitant freelance rate to management. I thank you.]
Posted by steve simels at 12:00 AM

Man you do know how to build these things to a fine crescendo (thanks, btw) but I will say My Back Pages, because i was older then, i'm younger than that now.

REmember that schlocky song "Patches?" It really is maudlin, with the talking verses and sung chorus. Yet I find it strangely compelling.

The Who - "The Kids are Alright", which I had on Meaty, Beaty, Big and Bouncy. Had to be in the top 5 for 'album time on my turntable' in high school.

The Replacements - "Sixteen Blue", from Let It Be. Needs no explanation.

Thomas Dolby - "Europa and the Pirate Twins", from The Golden Age of Wireless. A theme somewhat similar to the J. Geils "Centerfold", which probably also could be included here.

Pretenders - "Middle of the Road", off of Learning to Crawl. great song, but esp. the bridge and onwards. Exhibit B re: Chrissie Hynde, force of nature, as Steve put it earlier this week.

Richard & Linda Thompson - "Don't Renege on Our Love", off of Shoot Out the Lights. Entire album probably could be cited in this Listomania; growing up can be pretty painful.

They Might Be Giants - "Older", which I have on the Dial-A-Song compilation. (And now you're even older...)

Tom Waits - "Cold Cold Ground", from Franks Wild Years. I use this as an intro for fungi in my biology class...

Well, that turned out to be a sort of depressing set - how about

Cyndi Lauper - "She Bop" from She's So Unusual, to end on a lighter note.

the Godfathers track was new to me, thanks Steve!

steve, I have long wanted to say these three little words to you:

"When I Was Young" by the Animals

The Who, Tattoo. One of the best songs off of "The Who Sell Out", and that's saying something.

Off the top of my head:
Nothing At The End of the Rainbow -Richard Thompson
You Little Fool - Elvis Costello
She's Leaving Home - The Beatles
Wouldn't It Be Nice - The Beach Boys

and since NY Mary's link didn't work: News At Ten - The Vaprors (Yeah!)

As far as Bruce v Any Trouble: Bruce owns it. Though Any Trouble's Second Choice is a fine pure pop single.

Bruce could probably populate the whole llst but for now:
The River
Promised Land

"I'm in the middle without any plans
I'm a boy and I'm a man
I'm eighteen and I like it!"

Always had a soft spot for The Descendents in this category - I Don't Wanna Grow Up and Suburban Home are really solid and the later When I Get Old contains great echoes of those, facing a near-fated reality kicking and screaming...

Mose Allison's "Young Man Blues" leaps to mind, but an even more apt Mose number is "City Home," about a country boy dreaming of moving to the city (and of course, there's only one city for a jazzbo kid):

Mose is on my mind today because I've just learned that he's putting out a new elpee - first one in 12 years - later in the month.

The first track can be downloaded here. This tune will make your day.

The guy is 83, and he's touring his ass off this spring. Hats off to Mose.

An in the vein of I'm an Adult Now..
John Hiatt's Your Dad Did

When I Grow Up by Garbage (seriously)

Just to bring up Bruce again, but this time from the other end of the age spectrum: Girls in Their Summer Clothes.

Still some oldies left for me:

Who am I - Country Joe and the Fish

And not a big fan but who doesn't know this by heart: Cats in the Cradle - Harry Chapin

"Another Brick in The Wall" - Pink Floyd

Ah, think you're right BG. It was Janis Ian.

Guess since I'm here I'll add In My Life - Beatles. Love most of the covers of that one too.

And is Stacy's Mom - FoW stretching the meme too far?

Speaking of Puckett sleaze, what about "Woman Woman"?

I've seen the way men look at you when they think I don't see
And it hurts to have them think that you're that kind
But it's knowing that you're looking back that's really killing me
Woman oh woman have you got cheating on your mind?

A woman wears a certain look when she is on the move
And a man can always tell what's on her mind
I hate to have to say it but that look's all over you
Woman oh woman have you got cheating on your mind?

It doesn't get much more tawdry than that!

"Almost Grown" by Chuck Berry, the lyrics of which are a window into his not too pretty soul.

"Old Crowd" -- can't remember a valedictory like this from such a young singer. Nostalgia for a bygone time by a teenager.

For the same reason you chose "When I Grow Up," I'd second Edward's nomination of "Wouldn't It Be Nice," which if seen as the beginning of a song cycle ending with "Caroline No," is even more depressing. Come to think of it, "Caroline No" would be another worth entry in this category.

Got to agree with fellow Dave's nomination of "I'm 18."

And yes, "At 17" was Janis Ian's. But Laura Nyro had many in this category, perhaps most famously her time warp, "And When I Die."

with the Godfathers, be aware that each succeeding album had a little less mojo until there was none at all. Hence their return as a reunion band.

"Those Were the Days" - Mary Hopkins, which was produced by Paul McCartney.

Can we stretch the genre to include the blues?

I'd nominate "Cowboys to Girls," by the Intruders I think?

Oh, and thanks for sharing The Pussycat Dolls. That's the worst thing I've ever seen.