As Long as I Gaze on Waterloo Sunset I am in Paradise....

The great Terry Reid, with the Waddy Wachtel band, and a fabulous cover of what may be the most beautiful song written in the English language in the second half of the 20th century.

This is from a memorial show for late bassist Rick Rosas two weekends ago. And no, it is not as transplendent as the earlier version of the song by the same crew that changed my life and which I wrote about, rather passionately back in 2007; Terry's rather obviously hamming it, and his voice is way too low in the mix.

Still, it's worth beholding, and I think by the end of the clip you'll get choked up despite the flaws.

I should add that the guitar player in me is delighted you can see Waddy's hands so clearly; I plan to learn every note of this arrangement toot sweet.

POSTSCRIPT: Courtesy of a certain Shady Dame of my acquaintance, a few years ago I actually got to see an actual Waterloo Sunset. 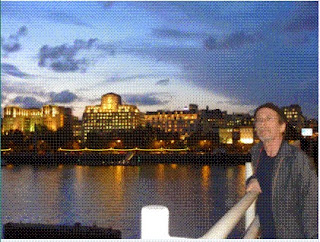 Whoa! That's already on youtube! As one who was at that show I gotta tell you, it was amazing! Just like old times at the Joint (Black Rose Tavern). Waddy's the greatest! He can do it all!

I was surprised they waited so long to have the tribute concert. But I'm glad they did because I was in England when he died. Sandy and I successfully crashed Jack Bruce's funeral around that time, along with seeing 10cc. Watch for bootlegs of both if you're interested.

I sat right behind Rick Rosas at a Neil Young solo acoustic concert at the Wiltern in 1999. Sandy and I were in the second row (rolling DAT of course. We taped both of Neil's shows at the Wiltern and both of his shows at the Joint in Vegas on that tour). In front of us were DJ Jim Ladd, Rick the Bass Payer and Richard Gere, who, thankfully, were very respectful listeners. We had an interesting conversation with them between the sets. Sandy got a recipe off Rick. To the left of them were DJ's Rita Wilde and Gino Michelini who inconsiderately blabbed through the entire acoustic show. Fuck them.

With the great Phil Jones on drums!