Well, well, well. Look what made the top of my album list in this 2014 Village Voice Critics poll!

LET THERE BE WEASELS! 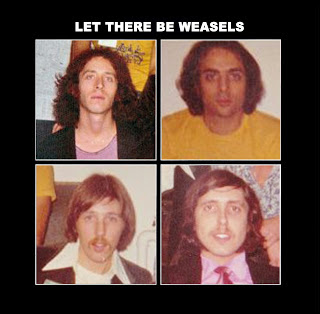 I wonder how that happened?

Incindentally, one of my comments made the cut; you can read it here.

Unfortunately, the bastards editors declined to include my accompanying joke:

the quote of the year clearly belonged to Nicki Minaj, who when people objected, for some reason, to the totalitarian imagery in her "Only" video replied ""I'd never condone Nazism in my art." Mighty white of you, Nicki. Incidentally I liked that fascist stuff a lot better in 1991 when Janet Jackson did it as "Rhythm Nation."

Oh ... for the days when my friends and I looked forward to the annual Christgau Pazz & Jop essay that was always brilliant AND frequently made no sense.

Of the top fifty listed, I agree with Beck, The War On Drugs, Real Estate, TV On The Radio, Ex Hex, Parquet Courts, Leonard Cohen, and Spoon. And of these, Spoon, TVotR and Ex Hex. But the thing about the list for me was always the reasoning behind some of the choices and then trying to find out how to listen to the albums.

Now, with Spotify (and others), listening is no problem.

And perhaps had you replaced "white" with "nice" in your comment it would have been published. Some expressions, such as "Mighty white of you," don't travel well in wide open spaces.

I remain of the opinion that the phrase, used ironically, is more than appropriate here, given the offensiveness of the artifact in question.

Your mileage may vary, of course.

I agree on Dave G.