Weekend Listomania's Greatest Hits: Special Gross Me Out of My Condo Edition

[I first posted this one back in early 2008, i.e. the ass end of the Bush Era, and if you had told me at the time that things would be even more screwed up in this country in 2015 -- at the beginning of what Charles Pierce accurately refers to as The Reign of the Morons -- I would have suspected you of huffing drugs more potent than I had ever imagined. In any case, I've done some rewriting and added a new entry, although all that proves is, in the immortal words of my old chum Erik Frandsen (doing business as existentially depressed German UN ambassador Hans Beinholtz), that the sad farce continues. -- S.S.]

POST-ELVIS MOST VAGUELY OR CRASSLY OFFENSIVE POP/ROCK SONG OR VIDEO EVER!!!!

You know -- one that's in ridiculously bad taste, politically obnoxious, or just annoying on some level not necessarily related to aesthetics.

Okay, here's my totally top of my head Top Eleven:

I don't know what's creepier -- the fact that it's a bubblegum song about cannibalism, or that it was written by Rupert Holmes.

Next stop is Vietnam!! Whoopee, we're all gonna die! BTW, Sadler went on to be a noted collector of Hitler memorabilia.

The ultimate teenage death song, with the added sick twist that she's a ghost. Think "The Sixth Sense" for morons.

8. Frank and Nancy Sinatra -- Something Stupid

Or as we used to call it back in the day, "The Incest Song." 'Nuff said.

This guy had so many tender love madrigals it's hard to pick one. Of course, he did have the good grace to actually die for our sins....

Me, I think this one's funny, but actual crazy people disagreed and got it banned in some markets. Interesting....

42nd Street peep show jerkoff palaces as a cute rite of passage for adolescent boys? Yuk. This is the video I show people when they tell me how smart Madonna is....and yes, I know it sold.

Let's hear it for spousal abuse!!! Seriously, Carole King wrote this as a sort of protest song, but producer Phil Spector kind of missed the point (in retrospect, not much of a shock).

Granted, there's a large selection of offensive hip-hop and rap records out there, but this one, which suggests it might be a good idea to off gay men, kind of screamed for inclusion. Of course, in its defense, it is largely unintelligble, even with a lyric sheet.

Let's forget, for a moment, the fact that this song sucks hippo root, that this woman has no fucking talent whatsoever and that she would, if she thought it would gain her some attention, quite literally set her hair on fire.

That said, I will leave you with the joke I wrote for the forthcoming Village Voice critics poll (which, with any luck, will garner me a check for fifteen dollars). To wit: 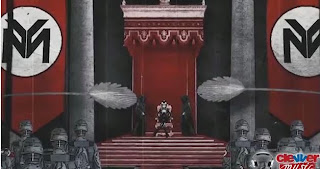 "The quote of the year clearly belonged to Nicki Minaj, who when people objected, for some reason, to the totalitarian imagery in her "Only" video replied ""I'd never condone Nazism in my art." Mighty white of you, Nicki. Incidentally I liked that fascist stuff a lot better in 1991 when Janet Jackson did it as "Rhythm Nation."

But the hands down, most twisted sick record of all time is without question ---

"Ain't got no place to lay your head/Somebody came and took your bed/Don't worry, be happy..."

Tell that to a real homeless person, asshole. Seriously -- as my old colleague Glenn Kenny famously wrote about this song in the Village Voice, there's only one possible response to it:

Alrighty then -- what would YOUR choices be?
Posted by steve simels at 9:50 AM

I find Bloodrock's "DOA" to be massively creepy.

I lost friends in the Vietnam clusterfuck.
Barry can go Sadler himself.

"Don't Worry" was my introduction to Bobby, and as a result I've made the effort to ignore his entire existence and career.

And didn't Marilyn Manson pull the same kind of Nazi shit 15 years ago?

Joe Tex - I Gotcha. Forget the cool drums, this is a song about date rape, pure and simple. Sample lyrics:

"You saw me and ran in the other direction. Yeah.
i'll teach you to play with my affection. Yeah."

The Beatles - Run For Your Life is a lovely little Kill the Bitch song.

Then there is Bush Was Right by The Right Brothers. Probably the most brain dead anthem outside of Country music: http://youtu.be/o-z2D9lo9-8ed

These ten sre dreadful enough for me, thank you very much.

And at least Bobby McFerrin gave me a line I've been using since the song came out: Don't worry, Bea Arthur.

And for fans of Petticoat Junction, Don't Worry, Bea Benaderet.

Laurie (Strange songs happen) not only for "suddenly she asked for my sweater and said she was very very cold" but the sound of DL's voice singing it. Barry Sadler's song because it was glorification of real death, in real time, for profit

The ultimate in rich-hippie hypocrisy and to top it all off just a bad song, signpost on Lennon's road from greatness to irrelevance.

As much as it pains me to admit it, I agree with Pete on this.

Boy, does that song suck. The hypocrisy I think is a reach -- it's like saying FDR couldn't have empathy for the little guy because he was rich -- but Imagine is just badly written and sappy.

"Jailbait" by Ted Nugent. I can't even bring myself to copy & paste a few lyrics. Ugh.

I'm vindicated! Other people think "Imagine" sucks too! For far too long I've been looked at like I was just caught performing...well...bad stuff with live kittens every time I make disparaging comments about that song, and now I know I'm no longer alone! Oh frabjous day!

And on the subject of Nancy Sinatra and the Beatles, you haven't lived until you've heard her cover of "Run For Your Life". Well-nigh Lovecraftian in its evocation of creeping dread.

Nancy Sinatra - "Run For Your Life"

I posted this on a music forum a couple of weeks ago, but I thought it might fit in here, considering we're talking about offensive songs...

When this song was first released it caused such an uproar (cries of blatant sexism and misogyny) that the artists backtracked and re-branded their song as "satire" (as in "We were kidding – really!").

Whenever and wherever this song is played it now carries the ultra-serious disclaimer:

The following is a satirical video based on Sororities/Fraternities and the cliché "Literally I Can't". This content is in no way to be interpreted as misogynistic or negative towards any groups of people. It is an art piece and it shall be taken as such.

In other words: "We were kidding – really!"

There isn't a pop song written that can offend me. Misogyny, racism, abuse, necrophilia, insanity, homophobia, incest, stalking, rape, murder, it's just a shot/kiss away. If I shoot my mouth off, will you show me what that hole is for? It's a thin line between love and hate.

I always found He Hit Me (And It Felt Like a Kiss) to be a song of innocence and of its time. Can you really have a long-term honest relationship with someone without ever slapping them? Passion manifests itself in many ways. As much as a girl likes a man who will fight for her, she also likes a man who puts her in her place when she deserves it. The best part of breaking up is making up. I, for one, like a man who understands that being rough can be a most tender thing.

And, yes, "Imagine" sucks. Hated it from day one. Bagism anyone? "You can say he's a fucktard, but he's not the only one."

"Imagine" has now earned its rightful place as insincere fodder for various singing competition television shows. It inspires the mundane.

And then there's Billie Joe Armstrong.

BTW, Nancy's my girl. Bought the whole catalog when Sundazed put it out there. Lee Hazlewood rules. Nancy livens up many a demented party.

With regard to above, The Pretenders "977" sums it up.

I wouldn't say this next song offended me so much as has just annoyed me for a long time:

Especially that godawful section, which goes on for two-three detailed, excruciating minutes, equating baseball with sex (talk about, as Mr. Simels says, CRASS, not to mention an incredibly TIRED and OBVIOUS metaphor.) I mean, I guess (real-life baseball announcer) Phil Rizzuto got a decent cheque out of it, and good for him, but... urrggh! As far as I'm concerned the whole song is an overlong, histrionic piece of CRAP.
And, while I'm on the subject, so is the album from which it came, the multi-platinum-but-still-egregious-to-this-day,"BAT OF HELL".
Thanks for letting me vent,

Sorry, the correct title of the Meat Loaf album is, of course, "BAT OUT OF HELL". And I'll tell you something else that's egregious: my middle-aged motor-skills late in the day.

The video that immediately comes to mind is that hideous thing by White Snake with Tawny Kitaen slithering all over a car. I can't remember what it's called, but when I saw it, I wanted to punch every person associated with it.

I would love to come up with something original but no songs has ever offended me as much as Barry Sadler's.

"Treat Her Like a Lady" by The Cornelius Brothers and Sister Rose always skeeved me out.

I forgot there was someone named Meatloaf who sang an awful song I'm forcing back down in my memory. I refuse to recall any of it.
I once, drunkenly yelled across the room to Meatloaf, "Hey Meat!"
"what?" he mouthed. "
"Gotta light?" I yelled,
"No," he said.

"One thing you can't hide, is when you're crippled inside"

I once, drunkenly yelled across the room to Meatloaf, "Hey Meat!"

The New York Times referred to him as "Mr. Loaf."