Compare and Contrast: Can Blue Men Sing the Whites?

You know, as a general rule, I've always found the meme (sorry) that rock-and-roll is about white kids ripping off black music blah blah blah at best a little simplistic. And in the case of The Rolling Stones, in particular, more than a little silly. There's no question, IMHO, that some of the Stones' blues and r&b covers are at least as good as the originals, and in some cases improvements or genuinely inspired reimaginings.

In this case, however, uh, no.

From September of 1964, here's the Stones' big hit single version of "Time is On My Side." 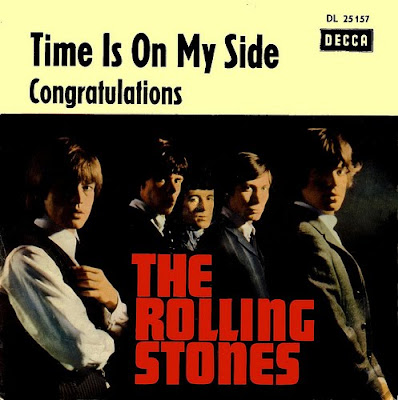 And from a month earlier, here's the not such a big hit version by r&b belter Irma Thomas. (Actually, it was the B-side to Thomas' "Anyone Who Knows What Love Is.") 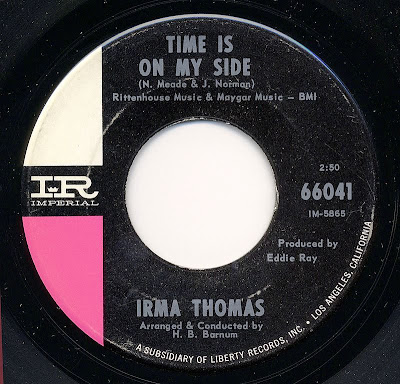 I love the Stones version and always have, but having just discovered the Thomas -- the production of which alone qualifies it as a work of genius (those kettle drums, for heavens sake) -- I gotta say that Mick and company really sound like the whey-faced Brit kids that they were by comparison.
Posted by steve simels at 12:03 AM

It's the R&B vs The British invasion sound, by contrast it certainly is black and white(sorry for the pun)

Starting out all the British band r&b and r&r covers sounded like that, very clean, no grit. Some were good nonetheless. Especially The Beatles doing covers of Chuck Berry, Carl Perkins and Larry Williams.

Those of us who hadn't heard the originals thought these covers were very stimulating to the ears at the time. Until we started to go back, rediscover and made the decision on what was best.

And that's my rant. Good Night and Good Luck!

The organ intro makes no sense, and after the band kicks in it takes them a minute (or two, or three) to find the groove. But still your point is well taken, Steve, that their race alone shouldn't keep us from recognizing the greatness of many of the Rolling Stones' R&B covers. Just not this one.

And I don't have a problem with the notion that R&B became rock and roll when white artists started playing it. There was a stylistic change when that happened, most notably the greater prominence of guitars over piano and horns in the arrangements. I just have a problem when this change is made out to be some kind of theft or exploitation. Artists are allowed to use anything they hear; a wide-ranging curiosity is what makes them artists. Nobody kicks that Louis Armstrong and Jelly Roll Morton used European band instruments and music notation to make New Orleans jazz.

And Irma Thomas has hated Keith Richards ever since. She even had her portion of the star-studded Michael Murphy film "Make It Funky" filmed elsewhere, once she knew Keith would be performing.

I dunno ... I always liked the Stones' version, maybe because it didn't sound like anything else on AM radio at the time. Great blues? Nope. Twangy Brit Fun-To-Sing-Along-With? Yup.

My wife is from New Orleans, and she turned me on to Irma 10 years ago, along with the Subdudes, and other regional Nawlins acts with less national exposure.

I enjoy the stones version, but the way that Irma holds the notes and does subtle things with the phrasing is something else again.

I'll say this about the Stones version -- Charlie on drums is definitely in the groove, as they say.

The Irma Thomas's recording is fabulous, especially that rockin' gospel choir. Even at my most jaded with the local scene, I always loved that recording.

I have a wonderful P-Vine disc that contains the originals of the Stones covers, and they all remain essential. The boys had excellent taste.

And forgive me, but please, PLEASE can we have done with "Nawlins." I thought the Katrina coverage had at least done away with it. (N'worlins would be closer to the mark.)