From 2003 and their debut album A New Devotion, please enjoy Canadian neo-psychedelic 60s-influenced garage-pop rockers The High Dials and their quite breathtaking "Diamonds in the Dark." 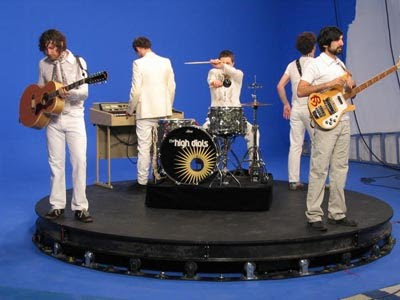 This is just about a perfect rock record, for me, anyway. Hypnotic but not boring, tough as nails but with the sweetest harmonies, amazing guitars, a monster modified Bo Diddley groove (those hand claps! those maracas and tambourine!), and that fabulous Kinks/Yardbirds rave-up at the end. Goosebump time from stem to stern.

If I was still in a band somewhere (don't worry, not a chance) this is the sort of song I'd want to open a gig with, is what I'm saying.
Posted by steve simels at 12:01 AM

If half the songs are as good as this A New Devotion will be a worthy album to download.

Wonderful! A nice combo of garage sound and power pop. By all rights this should have been burning up the radio airwaves...

Is the rest of the album as good?

Okay, the clip is back up. The old ones will be up as well this time tomorrow. Sorry for the inconvenience...

Nice. I have (I think) their second LP and it's ho-hum. Looks like I got the wrong one!

Nice. I have (I think) their second LP and it's ho-hum. Looks like I got the wrong one!

Wow, these guys are totally new to me. Nice!

New to me, too. I liked the song, although the hand claps reminded me a little too much of The Cure's "Close To Me".

Nevetheless, I think it's time to listen to more High Dials...