Songs I've Just Realized I Can't Live Without: The Note He Wrote

Jim Ellison, frontman of power pop faves Material Issue, killed himself (carbon monoxide poisoning) in his Chicago garage on June 20, 1996. I didn't hear about it till a couple of weeks later -- a passing mention in (I seem to recall) an otherwise unrelated item in Billboard -- but I remember being genuinely (and somewhat unexpectedly) saddened, certainly more than I'd been over Kurt Cobain's suicide. No surprise there, really; it's not exactly a news flash that an old fart like me wasn't, shall we say, Cobain's demographic, and in any case, just about every sentient being on the planet had probably seen his exit coming. Ellison's death, however, took me aback -- there had always been an undercurrent of regret in MI's music, but the guy who wrote and sang "What Girls Want" had nonetheless struck me as somebody with a generally positive outlook on life. Besides, he was only 32, and it just seemed so sad and pointless. 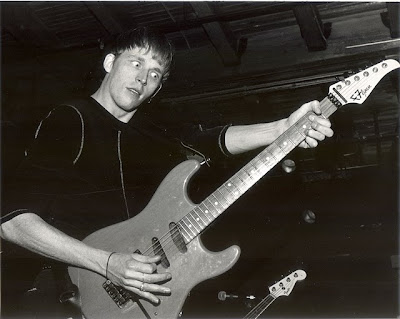 Nobody ever really knows what drives another person to such extremes, of course, and family and friends have been mostly tight-lipped about the circumstances, but apparently a busted romance had something to do with it. So when Telecommando Americano, the posthumous Material Issue CD the band had been working on before Ellison's suicide, came out in 1997 I had a bit of trouble reviewing it. For obvious reasons, I could barely get past the opening track.

"What If I Killed Your Boyfriend."

A great snotty and blackly comic take on the classic rock kiss-off song, I think, which would have been enjoyed as amusingly ironic if Ellison had lived to see it released, but which resonates on all sorts of other levels in the here and now. I mean, there's really no other way to hear it except as a window into his doubtless desperate emotional state at the time.

I should add that a version of this was going to be the lead-off track on an actual solo album of cover songs I was working on in 1998. The concept had to do with awful girlfriends and tragic relationships. The working title: More Songs About Anger and Embittered Self Pity.

Fortunately, for a number of reasons, cooler heads prevailed.
Posted by steve simels at 12:00 AM

Had heard of the band but never any of their stuff.

Hey Joe, where you going with that gun in your hand?

Great song, tragic situation. I like the way it has a punk feel and still uses a wah wah. What a great new wave voice!

Well -- this one just bummed the heck out of people, didn't it.

No worry Steve, good song by a slightly tragic figure. Kobain had a few good songs in him too. I'm going to dig deeper into Material Issue stuff.

I felt the same way when Doug Hopkins, the guy who wrote the good songs on the first Gin Blossoms record, killed himself.

Indeed. Although I gather he was another one that, like Cobain, people knew was more or less doomed for a long time before he actually did it.

Not meaning to trivialize what was obviously a tragedy, of course.