Well, it's Friday and you know what that means. Yes, my Oriental flourish of strumpets avatar Fah Lo Suee and I will be taking an emergency meeting with former nude model turned Massachusetts senator Scott Brown [R-pimped his daughters].

Actually, that's not strictly accurate. In real life, I'll be in New Jersey helping my mom celebrate her 90th birthday (Hi, mom!) but I figured it was worth saying simply to get up the nose of a sensitive reader who took offense to my making fun of a certain well-known theocratic nutcase in last week's Listomania. And if that sounds meanspirited -- hey, it's been a very irksome week.

In any event, further posting by moi will have to be sporadic for a day or two.

Yeah, yeah, I think I might have done this one before, but I'm senile, and as it turns out, there was news last week -- seriously -- that gingko biloba actually doesn't help memory at all. So this subject has obvious personal resonance.

I'm sorry...have we been introduced?

Anyway, no arbitrary rules of any kind. Go nuts.

And my totally top of my head Top Seven are:

I'd actually forgotten how much fun these guys were. Love that xylophone solo!

Great song, but when I watch the video I think -- for a fat guy, he doesn't sweat much.

As in "everything gives you..." And this was from Joe's big mainstream commercial breakthrough album, ironically.

If memory serves, the real life meth-dispensing Park Avenue doc the Beatles are referencing here is the same one who used to peddle speed to the Warhol crowd, thus lending credence to the rumor that Brian Epstein was a big fan of the Velvets first album. Come to think of it, I seem to recall reading somewhere that Lou Reed actually took a meeting with Epstein in '67 to discuss management, but for whatever reasons -- including Epstein's sudden death, obviously -- it never came to anything. History sure would have been changed in unfathomable ways if it had, of course.

And who can argue with that? 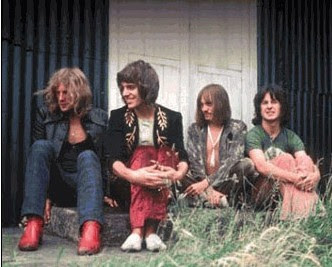 I would just like to go on record as saying that I have never been able to listen to this track without laughing. Seriously. I inevitably visualize it being sung by four screaming gay midgets. I have no idea why that is, but it's true.

Alrighty, then -- and what would YOUR choices be?

[Shameless Blogwhore: My parallel Cinema Listomania -- theme: best or worst big screen debut by an actor or actress -- is now up over at Box Office. As always, I would be your BFF if you could see your way to going over and leaving a comment, even though there's not a single gratuitous Avatar joke. Thanks!]
Posted by steve simels at 7:37 AM

Let's get this party started with "Bad Case of Loving You" by Robert Palmer.

As long as Jeffrey's on the Stones, how 'bout "Sister Morphine"?

Or The Rascals' "Good Lovin'"?

Natal anniversary, old chap? Truly? May it be MOST happy.

As to the topic: Doctor, my eyes--Jackson Browne; Bad case of lovin' you--Robert Palmer...

Anything by Dr. John, just about...

I'd like to nominate the Grateful Dead's for Good Lovin', only because there's an infamous version from Princeton, New Jersey on April 17, 1971, during which Pigpen does a wild 15-minute monologue about getting thrown out of the house by his "ol' lady", meeting up with an old friend who's now a pimp, availing himself of the services of the pimp's least expensive girl, and having to go to the doctor a week later with the clap.

Phil Lesh singled it out as one of Pig's greatest performances.

On that note, I guess I should add "The Clap" by Steve Howe/Yes.

Mrs. S is a nonagenarian. Many more!

(here's some weirdness for you: I just paged down and my verification word is

Obviously, the answer is:

My Shit's Fucked Up, Warren Zevon, from the "Life'll Kill Ya" album. From the same disc, we also have the genuinely poignant Don't Let Us Get Sick, written before he was diagnosed with his terminal cancer.

Then there's Feelin' Alright from Traffic (written and lead vocal by Dave Mason). I confess I prefer the original version to the admittedly funkier Joe Cocker cover.

Obligatory Who song: Go to the Mirror, from Tommy.

Warm regards and many happy returns to Sunny!

While I have been scooped on the songs I thought of, let me say, as an official member of a political minority on this blog, that I laughed outloud at the (pimped his daughters) comment.

And happy birthday to your mom! Many more for her and you and all of us.

Well, you could plug in just about any mid-sixties Dylan number since they were all about shooting up.

I've been waiting for somebody to nominate The Cramps' "Stay Sick!"

Steve, your "Stay Sick" suggestion reminds me of the brilliantly abrasive "Touch Me I'm Sick" by Mudhoney. Sounds like the beginning of an inspired mixtape.

A brilliant record and video:

Most of mine have been taken already, but want to wish Mrs Simels a very happy birthday.

And I think no one has said

Can't Always Get What you Want -Stones (went down to the Chelsea drugstore - to get my prescription filled...

All the others already got got, I'm afraid. Happy Birthday to your Mom, Steve, and enjoy the party.


and, Here are a few that haven't been mentioned yet:

Graham Parker - "Lady Doctor", from Howlin' Wind. I am not aware of a better album, by anyone. Equal yes, better no.

The Pogues - "The Sick Bed of Cuchulainn", from Rum Sodomy and the Lash

The Jam - "The Bitterest Pill (I Ever Had to Swallow)", (a single); I have it on Greatest Hits

The New Pornographers - "The Bleeding Heart Show", from Twin Cinema. Didn't I get this YouTube link from this blog? Has to be one of my favorite clips ever...

and Happy Birthday to Mrs. Simels!

I was feelin' kinda seasick ...

did I miss "Doctor,Doctor" a great Entwhistle song from the Who's US Magic Bus LP?

Oh, and "Doctor's Orders!" By, um... (excuse me one moment...) by Carol Douglas! Also a hit for Sunny and Sue in the UK and South Africa. Written by Roger Cook, Roger Greenaway and Geoff Stephens!

Rockin' Pneumonia and the Boogie-Woogie Flu ?

Kinks, Have Another Drink it'll make you feel better -- "but don't take my word for it; try it yourself"