From 1966, please enjoy first generation San Francisco band The Sopwith Camel and "Postcard From Jamaica," their (for want of a better word) adorable follow-up to the smash "Hello, Hello." 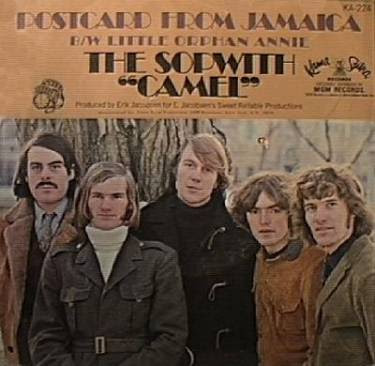 This actually got a fair amount of airplay, at least in my NYC neck of the woods, so technically these guys aren't the one-hit wonders that everybody thinks they are. In any case, it's a beautifully written song/record, with pop smarts galore and a pretty impressive level of musicianship, and I've always been vastly taken with singer Peter Kraemer's breathy adult choirboy delivery; he's kind of an ironic folk rock equivalent of Colin Blunstone (of The Zombies), if that makes any sense at all.

Incidentally, the album this is from -- released at the height of the Summer of Love, long after the group had broken up -- is a little gem, deftly mixing the group's obvious good time music influences with some psychedelic touches more characteristic of San Francisco back in the day, and its well worth searching out. I should also add that it's produced (brilliantly) by the now largely forgotten Erik Jacobsen. Jacobsen, who does not seem to have been active in the biz in recent years, was also behind the board for the first three Lovin' Spoonful albums, Norman Greenbaum's "Spirit in the Sky," and the first couple of Chris Isaak LPs, and I think he's ripe for some kind of critical reappraisal.

Oh, and it occurs to me I may have posted this one in a Listomania at some point, but I'm senile, so cut me some slack.
Posted by steve simels at 12:02 AM

Thanks for this. It's a cool song, and somehow I've managed to live a long life without ever hearing it. It sure doesn't sound like a single to me. I get the Blunstone comparison, too.

Love that track and both of their lps.

I have the Sopwith Camel lp and I love it.
I remember hearing them come on local radio in Cleveland to promote "Postcard to Jamaica". "Frantic Desolation" is my favorite track on the album.

Hardly a bad track on the album. "You Always Tell Me Baby (The Way I Have to Act Around You)", and (I'm working from memory here) "Somewhere in a Dream" -- a floating instrumental with some lovely, ethereal vocals near the end -- like "Blue Jay Way" would have been if "Blue Jay Way" were actually a good song -- "Frantic Desolation" and "Little Orphan Annie" were the standouts I recall (along with "Hello Hello" and "Postcard". Now their followup album "The Miraculous Hump Returns" was something else-- confused, undisciplined. If only they'd stayed as sweet as they were in "Postcards". Thanks for the reminder.

"Somewhere in a Dream" is astounding. I've actually been thinking of posting that since forever...
:-)

Funny to see this. It was because of a rave review in Stereo Review back in the 70s that caused me to purchase their album "The Miraculous Hump Returns from the Moon". A few years ago it was privately released on CD and I was able to buy a copy to replace my scratchy LP.