A brief and belated postscript to the "favorite drum stuff" Listomania from the other week:

In good conscience, I must add a song that occurred to me about five seconds after I posted. So, from 1986, please enjoy entertainingly lachrymose synth-popster Howard Jones and the vastly superior remake of "No One is to Blame" featuring some balding guy on those pagan skins. 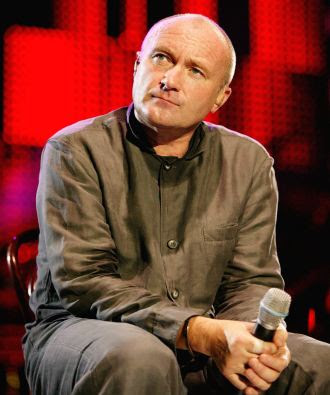 Like most sensible folks, I ODd on Phil Collins back in the day (jeebus -- how many annoying power ballads did he have on the soundtracks of 80s films?) and to be honest I never much cared for Genesis in either their prog or pop incarnations. Nonetheless -- the man is an absolutely brilliant drummer, with a groove and a sound that behooves respect from mere mortals, and he owns this song. Which I think is lovely, actually, but what Collins does with it simply kicks it into another dimension of gorgeous.

Indeed, I maintain that his live drum entrance in the tune's second verse is as perfect a moment as any in all of Western art.

Okay, I'm obviously kidding about that. But not as much as you might think.
Posted by steve simels at 7:55 AM

Just when you think you've got Mr. Simels all figured out he goes and posts a Howard Jones song--and makes you appreciate the drumming, which you've never done before. As an unreconstructed fan of proggy Genesis and lifelong detractor of '80s Genesis and solo Phil Collins, I'm happy to find myself open to new perspectives. What's next--the unappreciated splendor of Mike & the Mechanics? I'm all ears...
PS. Word verification: sussudio (just kidding)...

Groucho: You might think me a sentimental old fluff, but would you mind giving me a lock of your hair?
Dumont (smitten): A lock of my hair? Why, I had no idea that you ...
Groucho: You're getting off easy. I was going to ask for the whole wig!

Ah, memories. I caught HoJo at his zenith in '89 at what was then Great Woods (now the Tweeter Center, I belive, if it's indeed still open). He used this tune as the big audience participation moment. Everybody swayed their arms left and right in solidarity with the victims of Tiananmen Square. How the song jived with the situation is still a puzzler 20-odd years later.

Steve, you have made me admire Phil Collins, damn you. Please just don't make me admire Peter Criss.

I first heard of Phil due to his drumming for Bowie and Eno. I love some of those songs, he gets a groove bigtime (think Heroes) and is very thoughtful in terms of his cymbal use as well.

But dude is one of the best on his instrument.

The same could be said for his drumming on "In The Air Tonight" ... yes, we all got sick of him, but is that really his fault?

It's been a while since I've heard it, but I recall Genesis's "Three Sides Live" as a great extended sample of his skills.

Off topic, but watched volume 2 of Old Grey Whistle Test last night, which includes a performance by The Who of "Relay" (after some scathing introductory comments on the musicians union by Daltrey). Moon, knowing a pre-recorded track is what's actually being heard, mugs and flails wildly. It had me in stitches.

I remember Collins appearing as a sleazy Brit game show host on "Miami Vice" - he was great!

I just read that Collins is incapacitated as for future drumming. Very sad on a number of levels...

Yeah Steve, it was what he did best in my opinion. It is interesting to me that he did so much work for Eno when Brian Eno was working as a producer. I love that work a lot.

I really liked the song Paperlate by Genesis. Good drumming and horns in that one too.

A spin-off on the Phil Collins discussion -

There was a great episode of NPR's 'This American Life' that had to do with Break-ups. In it, the radio person (Starlee Kine) decides to write a break-up song due to her recent break-up (of course), and in the process, interviews Phil Collins for his advice. I recall expecting this to be awful, but in the end I really liked it. I think it's definitely worth a listen, for that alone.

However, to me, the true bonus in the episode was a great little song that came out of the process, by Kine & collaborators, called "The Three of Us". I can't find it on the web anymore, although I did download it at the time. You can hear parts of it on the webcast of the episode.