Idylls of the King

From 1982, and the simultaneously funniest and most appalling bootleg of all time, please enjoy the late Elvis Presley and the dance sensation that fortunately did not sweep the nation -- "Do the Clam." 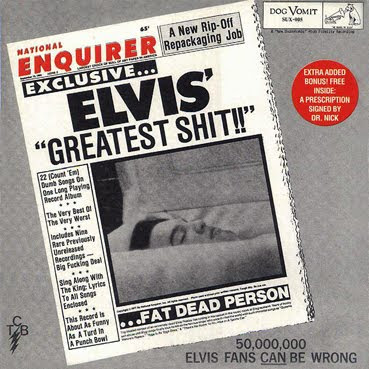 In case you were wondering, EGS was a collection of 22 of the most egregiously awful tracks on some of the crappiest of Elvis' almost literally countless albums -- most, but not all, from the movie soundtracks he ground out by the yard (some come from the blatant throwaway live records issued in his name as well). The idea, of course, was to make fun of even the possibility that Presley was some kind of an artist, let alone a major one, and in 1982, in the wake of the rampant over-commercialization of Presley's death, that wasn't as offensive a thing to do as it might sound, at least depending on your perspective. In fact, if the people who put the bootleg together weren't themselves Presley fans, I'd be very surprised.

I actually had this on vinyl back in the day, mostly for the cover art, although the reproduction of an actual prescription written by Dr. Nick was a really nice touch as well.

I should add that "Do the Clam" (which was written, I kid you not, by Ed Wood Jr.'s girlfriend and Glen or Glenda? co-star Dolores Fuller) is not, strictly speaking, the worst song of the compilation. That honor may belong to "Queenie Wahine's Papaya" or "There's No Room to Rumble Rhumba in a Rumble Seat," but obviously we're splitting very obnoxious hairs here.

Also, I am reliably informed that there's a CD resissue of this with bonus tracks. If you own it, I would like to meet you, if not (as I am wont to say) perhaps to shake your hand.
Posted by steve simels at 12:06 AM

Hey Steve, where can I pick this one up? Any ideas? Sounds like something to own.

Frank, I don't know where you can glom the CD reissue. I got this from some download site, and it's burned from the original vinyl as you can hear.

You're in the Village, aren't you? Doesn't Miss Kim's carry stuff like this? They're still around, right?

How about those horrible overdubs/edits at the end? Sheesh! Elvis sings the drek pretty well though. Musta been the seconal.

Unfortunately no Steve, Kim's is gone. And thank you very much Sal, I should have known you'd have the Elvis. Didn't want to be a bother. I searched on line everywhere, couldn't find it.

"He's Your Uncle, Not Your Dad!" Now there's some quality songwriting! -
bill buckner

Probably the worst of those "blatant throwaway live records" was "Having Fun Onstage with Elvis," which consisted not of live "songs," but the onstage patter in between.

I think it might actually be available as a CD...

So what - that means you can fuck him

Do The Clam is also on Elvis At The Movies, an anthology of the "hits" from his movies. The cover shows Elvis playing a dual-neck guitar.

Still have my vinyl copy. I'm going with Ito Eats as the worst song. Or at least the most memorably bad title.

related; there was a covers double disc called Last Temptation of Elvis, consisting of covers of only songs from his movies

Viv stanshall does the Rhumba son; Fuzzbox does Trouble, Lemmy does Blue Suede Shoes. And such as.

Unfortunately, the solid tongue in cheek nature of the project only serves to highight how awful these songs are.

To paraphrase Eric Idle in the Monty Python "Australian Table Wines" bit, 'This is not an album for dancing, this is an album for laying down and avoiding.'

Back when she was married to TBone Burnett, Sam Phillips did a kickass version of "Gimme Some Truth"--understated and nuanced and sincere.

And of course, there's Nina Gordon's bemusing cover of "Straight Outta Compton," which I love but don't "get."