In Search of Eddie Riff: Memoirs of an Amnesiac

So my old pals and power pop gods The Smithereens are playing B.B.King's in NYC on Saturday, and it occurred to me I haven't posted anything about them in ages.

Here's one of my top five fave 'Reens songs, from 1988 (and Green Thoughts, their fabulous sophomore album) -- "Only a Memory." 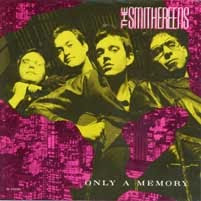 This was a big radio hit, at least in NYC, and at the time it was getting a lot of airplay, I was toiling at the late lamented Video Review, a rag where it only seemed that all my colleagues were rock critics. "OAM" itself was a big staff fave, but I distinctly remember that after it first got played on the office radio, it took us all at least a day or two to specifically identify what earlier song the opening guitar figure was stolen from inspired by.

A coveted PowerPop No-Prize, of course, will be awarded to the first reader who nails the identity of said song in comments.

A postscript: A year or two before this came out, head Smithereen Pat DiNizio asked another musician friend of mine (who shall remain nameless for the purposes of the story) if he wanted to try writing a song together. My friend jumped at the chance, and a bit later the two of them were in Pat's living room, guitars in hand, doing what songwriters do when trying to collaborate. Finally, at some point, Pat hit upon a riff that made his eyes light up.

My friend absorbed it for a moment.

Your SR review of "Green Thoughts" induced me to pick up that disc. Only a Memory got pretty heavy airplay in the Dallas/Ft. Worth area on the local "alternative" radio station. Also saw them on an MTV live music special around that time (back when MTV still played music) and was particularly impressed with a cover of The Seeker.

The opening riff of OAM has always sounded pretty familiar, but I never figured out from whence it came...

Sounds like I Want To Tell You by Georgie to me.

FD13NYC said...
Sounds like I Want To Tell You by Georgie to me.

Bingo! A coveted PP No-Prize is heading to you by sled wombat as we speak.

The giveaway is the guitar sound, I think...

The Records steal the same riff on "Spent a Week with you Last Night" on "Crashes" Check it out.

Sorry, I am gonna need to hear a recording of Georgie. Not that I doubt The Smithereens borrowed, because they were never shooting for originality. I just can't place that band or song.

Beatles -- on Revolver. "I Want to Tell You." It's the same riff played sideways. And as I mentioned pretty much the identical guitar sound.

How I love these guys. I had an email friendship with the drummer when they were on RCA. My wife at that time worked for the lable, and we could get catalogue product for nothing. Diken would call up 4 times a year with requests for old country stuff that RCA put out.

Have you guys heard their take on Tommy or the early Beatles stuff? They have done covers albums of both, and I enjoy them a lot. Tommy is available at better than cd quality download. It rocks!

This post really says it all about that band - derivative in the extreme; did the guy ever have an original thought? Certainly not that I've ever heard.

Smithereens drummer Dennis is a great guy, with an encyclopedic knowledge of all sorts of music, not just rock. Very funny, too.

His wife is an old bud of mine from my Greenwich Village days; I'm gonna say to hello to her at the gig Saturday. Should be fun.

Noam, I would cut them some slack in that I don't think ever tried to fool anyone that they were originals. Their music has always been derivative, but heck if that were a crime, I suspect 90% of the musicians on this site would be jailed. A fun band with respect for their roots. Nothing wrong with that, IMHO. I can't listen to Radiohead all day.

Understood, and I guess that's pretty much the point of the post, but I'd say either disguise it better or go get a desk job, and spare us the 407th rewrite of I Feel Fine. Sorry to bust on your friends, Steve. I should get my own blog where I can bitch and moan and not bug people, probably.

I actually think they're a great band.

And mixing the Beatles and AC/DC -- which is their signature sound -- is a pretty neat trick, don't you think? Can't think of anybody else who's pulled it off, let alone well.

Nice backing vox by Marti Jones & Don Dixon on this one.

A great band and all nice guys!

I'll be seeing them perform tonight!