Compare and Contrast: The Midnight Train is Whinin' Low

Here's a great example of what we used to call the Folk Process at work. With, frankly, quite astounding avant-garde results.

We begin, from 1951, with bandleader Tiny Bradshaw's original version of "The Train Kept A-Rollin." 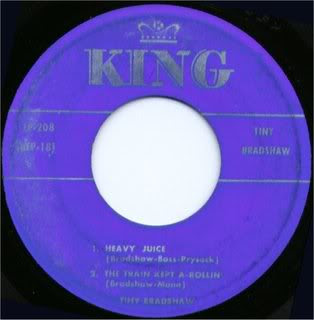 To be honest, I had never heard Bradshaw's take until I downloaded it over the weekend, but I was rather amazed to find (as you have doubtless noted by now) that it's an entertaining but utterly conventional jump blues. Party music, in other words, and no different really from countless other r&b hits of the period by the likes of Louis Jordan, Joe Turner or Wynonie Harris.

Which is why this next version from 1956 -- by the legendary Rock and Roll Trio, featuring the great Paul Burlison on perhaps history's earliest known example of fuzz guitar -- is so jaw-dropping. The Trio's take positively drips menace and madness by comparison, I think; lord only knows how it sounded to average ears at the height of the Eisenhower Era. 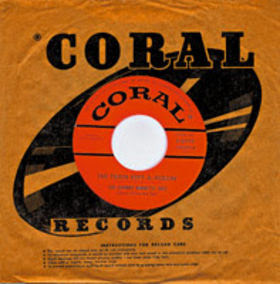 And then we have, from 1966, The Yardbirds with their further reimagining. Jeff Beck's simulated train whistle at the top was the clue that this one -- all metal and snarl -- was heading down a totally different track than any rock band had ever travelled. 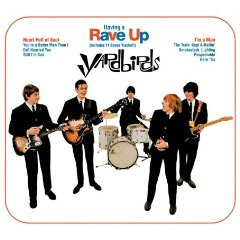 Of course, a year later the Yardbirds (with Beck dueling with Jimmy Page) would transform it again (as "Stroll On," for Antonioni's Blow Up) and send the song hurtling into what might as well be another galaxy. But we'll get to that during Friday's Listomania.
Posted by steve simels at 12:02 AM

I've never heard the Bradshaw version before either, pretty good, for an early 50's R&B take.

But my fave is the Burnette Trio version, among other great rockabilly tunes he recorded.

As for the Yardbirds cut, I agree, into another stratosphere. Good grouping!

Jeff Beck. That's really all that needs to be said. Jeff Beck.

And, hey - I never knew until a few years ago the "yardbird" is English slang for a chicken.

What about those overlapping vocals on the Yardbirds version? Adds just a bit more urgency and chaos to a song already about to burst. Incredible. (I have to admit I was brought up on the Aerosmith version--sue me. When I saw them play it at the Garden in '76 it was extremely stirring to my adolescent brain.)

Your description of the overlapping vocals is spot on, and I wish I'd said it.

Incidentally, did you know the Yardbirds version was recorded at Sun Records? With Sam Phillips -- yes him -- engineering/producing?

I've always thought Beck's first solo -- which is modified rockabilly -- must have made old Sam smile from ear to ear.

And there are still people in this town that think Aerosmith wrote it. Buncha townie dumbasses... - bill buckner

(BTW, Steve - Your boys The Upper Crust played down in the Fenway on New Year's Eve. I was otherwise engaged, but heard they were great...)

Actually, it was 1965, not 1966 ... it's the last track on the first side of "Having a Rave-Up", which I bought in a record store in Hackensack, NJ as a result of a recommendation in a column written by Clay Cole.

Interesting tidbit about that album ... after I had my tiny mind blown by the train whistle, I turned the record over to listen to the four live tracks on the other side. I thought, "Not the same guy on guitar." I was right ... it was Clapton.

While I agree that the jump from Tiny Bradshaw's version to R&R Trio's version is the steepest, for me this (recorded) song won't ripen fully until 1968 when Scotty McKay Quintet takes a stab at it.

Scotty McCay was a rockabilly hep cat in the late 50s (played with Gene Vincent) and somehow ended up cutting a single with the Yardbirds in '67(!) in England where he learned the song from the YBs themselves. Then he released his version of 'Train' in '68. Rumors have it that James Patrick Page himself was the soloist. In any case the guitar solo/bass solo SMOKES and is well worth tracking down.

Incidentally, the McKay version is the first version I heard of the song, so that may fog my perception a bit. Well that and the fact that McCay is from Texas. ;)

high praise indeed, Steve, and nope, didn't realize it was recorded at Sun. Fascinatin'. I've been listening to the Ultimate! Yardbirds collection of late--interesting how they ended up drifting toward almost but not quite generic pop...Also interesting that Andy Partridge chose to slag them in a B-side about a hopelessly L7 chick, called "She's So Square":
Take her to a disco and Screaming Lord Sutch it!
Everyone must look but nobody must touch
What about her car? E type is the latest
How about the Yardbirds? Jeff Beck is the greatest!!

Apologies for the confusion on the dates, folks.

I have an absolutely superlative sounding version on Rhino's v/a Texas Music Vol. 3. It's a great disc overall, too!

Well, so much music got packed into such a short period of time back then ... and these guys were waaaaaay out in front of the pack.

Hi
Just discovered your blog from a comment left to me by Steve. Great work. Goin' on my favs.

I believe Beck may have quit the Yardbirds during the 1966 of America. He was acting like a real jerk during the tour, playing some dates and not others.

The Broadcasters played a mean live version of Train Kept a Rollin' back in the 1980's.

Next to the Beatles the Yardbirds were the most influential band around in the mid 1960's for budding rock musicians.

That Burlison cut is friggin incredible. Where do you FIND this stuff? You got a crack team of research assistants chained in the basement or sumptin?

Actually the guitar player on the Burnette version of 'Train' is most definately not Paul Burlison although he took credit for it.
It is in fact the great Grady Martin.
You can read the whole story if you google Grady Martin Paul Burlison.