Jewels and Binoculars Down Under

Attentive readers may recall a story I told earlier this year about a mysterious (no return address) and life-changing package of bootleg LPs that arrived at my old Stereo Review offices in 1973 or early '74. The short version is they were all on the legendary Trademark of Quality label, and many of them featured cover art by a then little known comic book artist named William Stout (who has since gone to well-deserved fame both as a graphic designer and art director for film, most recently on Pan's Labyrinth).

Anyway, as I mentioned in the earlier post, perhaps my favorite and the most mindboggling of the boots in the package was a live acoustic Dylan set -- in perfect sound! -- from an April 20, 1966 show in Melbourne, Australia. I was web-surfing the other day, and finally found Stout's cover for the LP, so it seemed like time to share.

So, from the marsupial album (as I used to call it), here's Bob -- obviously cruising on any number of chemicals -- with an absolutely spellbinding solo version of "Visions of Johanna." Once you get past the stoned stage patter and the tuning up, obviously. 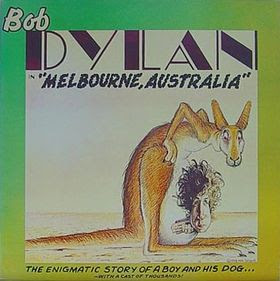 When pressed, I've always said the song itself is Dylan's masterpiece, and on balance I think this is the best version of it ever. Listening to it again for the first time in years, however, I now kind of think it's also one of the handful of greatest live performances of anything by anybody.

Quite by accident, I came across a copy of Sing Out! magazine (summer, '09) at work today. And it had a story in it that I think is hilarious. It seems that young Bobby Zimmerman spent the summer he was 16 at a Zionist summer camp in Wisconsin. At least I assume it was a Zionist summer camp, since it was called Camp Herzl.

Anyway, the lady who kept the camp's archives needed money recently, so she offered through an auction house that specializes in rock memorabilia a page in Dylan's handwriting that young Bob had submitted to the camp's poetry contest. It was only after the piece was shown to prospective buyers this year that someone noticed that the words were, in fact, a more-or-less-exact crib from a song by Hank Snow. Until then nobody had caught it.

The news did not deter the lady. She still refers to the page in question (still awaiting sale, according to last summer's Sing Out!) as a "handwritten Bob Dylan lyric."

Man, this takes me back.

I still have a vinyl copy replete with crackles and pops. Don't remember if I got it in college in Buffalo (there was a store across the street from the then-main campus that had a small bin of -- woo! so clandestine! -- bootlegs) or in Greenwich Village towards the end of the 70s.

No matter. Dylan sounds like he's at the end of his rope, and singing these songs is the only thing keeping him from plunging into some psychic abyss....

Wow! I remember seeing that cover in my local little record store/head shop back in the 70s. Good times, indeed...

I'm still not convinced that this is the all-time-best take of this song; I've always adored the 5/26 London performance (the one used on Biograph). And the Gaumont Theatre (5/16) version is pretty darn outstanding as well.

Whatever. There's no use nit-picking as I think most of us would probably agree that the entire 1966 tour is in the running as the greatest series of live shows in the history of the world.

There's no use nit-picking as I think most of us would probably agree that the entire 1966 tour is in the running as the greatest series of live shows in the history of the world.

I remember seeing that cover in my local little record store/head shop back in the 70s.

I can't believe no one has written a book about the history of "head shops."

NYMag had a short piece today about how the demise of the record industry has also affected bootleggers.

But by the nineties, he was selling as many as 10,000 copies of “hits” like a Misfits collection. He earned enough to quit his day job (“restaurant delivery and bars”) and live full time off his side vocation. “I made what a good used car salesman might make,” he says. “I could afford to go overseas and stay in a decent hotel. It was a reasonable business for a while.”

Goodbye to all that.

"I can't believe no one has written a book about the history of "head shops."

It's like the Sixties: If you remember head shops you never used one.

I was thinking the same thing ROTP! All the people who could write the history of head shops are otherwise engaged in fabulously interesting projects.

I could not make it through the track because it made me so sad knowing what his voice sounds like now.