And now, if you'll permit me, a cautionary tale. Draw what ever moral you may.

On the lovely winter night of October 25, 1978, I happened to find myself at New York's much-missed Bottom Line nightclub for a show by Dave Edmunds, Nick Lowe, Billy Bremner and Terry Williams, who of course were doing business as Rockpile, still the best traditional non-hyphenated rock 'n' roll band that ever trod a stage. There was a more than usually anticipatory buzz in the room, or so it seemed to me, and at some point a friend (the late Ruth Polsky, who went on to book Hurrahs and Danceteria and generally become a player in the New Wave scene in the city) came over to my table and, rather breathlessly, informed me that Keith Richards -- who the day before had beaten the Canadian heroin rap that was perhaps his most publicized drug bust ever -- was in the club somewhere and might be taking the stage. Sounded like fun to me.

Anyway, Rockpile hit the aforementioned stage a few minutes later, and after a couple of songs, Edmunds introduced a special guest, none other than Keef himself. At which point they tore into one of my alltime favorite Chuck Berry numbers -- "Let It Rock" -- which seemed an exciting choice, given that both Edmunds (with Brinsley Schwarz) and Richards (with the Rolling Stones) had recorded definitive live versions of it in the early 70s.

Here's the performance as it went down that night. And let's just say that whatever excitement I felt at the beginning didn't exactly last through the song's raggedy close. 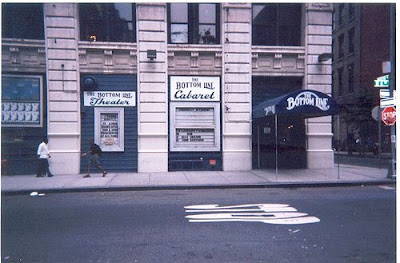 The show was broadcast rather soon thereafter, probably on the old WNEW-FM, and I taped it at the time, hoping it would sound better under the headphones at home than it did in the club that night. It didn't. And ever since then, every couple of years, I've pulled out the cassette, or of late the mp3, and given it a listen, hoping against hope that it would finally seem less of a mess than I remembered.

Didn't work today, either.
Posted by steve simels at 12:00 AM

The waste of a great rhythm section.

Ahh The Bottom Line, saw many a good show there, conveniently within a short walk from where I lived.

Caught Procol Harum there months before it closed.

There were a couple of Rockpile shows a little later on (early 80's) at the Ritz that were really good.

Oh, and as for the song, Keef must have been nicely junked up that night.

Hmmm, how does one celebrate beating a heroin rap? Hmmmm. Well, however you do, it does not help your guitar playing apparently.

Keef got community service time instead of jail, which he was seriously facing at that point.

His community service, if memory serves, turned out to be doing a New Barbarians show as a benefit for some Canadian school for blind kids.

a New Barbarians show as a benefit for some Canadian school for blind kids.

Enjoy, if you can. I couldn't.

I saw the NBs at the Garden around that time, and I must confess to being underwhelmed, mostly.

Keith wasn't good again until he really cleaned up. It's that simple.

Saw him at the end of the '93 Xpensive Winos tour at the Beacon. It was tremendous, he was in rare, gregarious form, slapping 5's with the front row, actually smiling and being quite charming.

After years of super-gargantuan arena and stadium Stones shows, it was delightful to see Keith in a theater.

But aside from that, how'd you like the show, Mr. Lincoln?

I lived a couple of blocks from the Bottom Line for many years. During the summer of 1975 I walked by there and saw the name of a performer I was curious about, who was booked through the entire week. I said, "Oh, I'll catch him the next time he plays here ... everybody comes back to the Bottom Line!"

And guess which rock critic saw him three or four times that week?

I was also at Keef's Beacon gig and it was incredible.
They put on a classic rock & roll show. I don't know who had a better time Keef or the audience.

Damn right I should have! All I would have had to do was go up the block. :-)

and "Talk is Cheap" is a really fantastic album, better than most if all modern Stones records.

I never saw the tour though...why the hell doesn't he continue working with that band?

I saw Rockpile the previous June, opening for Elvis Costello at Winterland in SF.

Sandwiched in between? Willy DeVille, who damn near stole the show.

Dave Edmunds was with Brinsley Schwarz? I knew Nick Lowe was, but I never heard of Dave Edmunds being with them. Wasn't he in Love Sculpture?

Dave was backed live by Brinsley Schwarz on "It It Rock" on a track originally released on a Brit comp album circa 1971. It resurfaced mid-decade on his "Subtle as a Flying Mallet" album. He also produced the Brinsley's final (and best) studio album.

I saw Rockpile open for Blondie at the Masonic Temple in Detroit. That was a great show.

I saw the same bill that dave(tm) saw - Rockpile/Mink DeVille/Elvis Costello - in Syracuse, and came away with a totally different vibe. Mink DeVille, with their sad, narcissistic posing, nearly got laughed off the stage.

I think my first Bottom Line show was Richard Thompson's first solo tour back in 1982. After I moved to the area, I went there dozens of times. The weirdest moment was when I realized that the slightly wizened Puerto Rican woman in the white fur hat and coat who'd sat next to me at one show was Ronnie Spector.