Okay, per some discussions we've been having here recently, for purposes of clarification let me simply say that yes, I'm well aware that most obscure pop and rock stuff from the 60s and 70s is obscure for a reason -- i.e., those records just weren't as good as the ones that actually sold because people liked them.

Sure, there are exceptions -- genuinely worthy bands or artists or albums that slipped through the cracks due to the vagaries of fate. But by and large, most of the stuff you and I have never heard (or heard of) from that period-- and for obvious reasons I specifically include the majority of the LPs that were being archived until recently over at the late lamented Redtelephone66 wesbsite -- is second rate and unmemorable. Which perhaps explains why I have never really had the urge to download a CD entitled Sixties Punk From Dayton, Ohio: Volume III -- Bands Beginning With F-L.

Life's too short, is what I'm saying.

That stipulated, however, from 1968 and their sole (eponymous) album, take a listen to The Travel Agency and "What's a Man."

And before you do, I should warn you -- the song proper doesn't begin until about 2 minutes in; before that there's an instrumental section, on various electronic keyboards, that's kind of impressive in the abstract but can probably be skipped for purposes of our discussion. 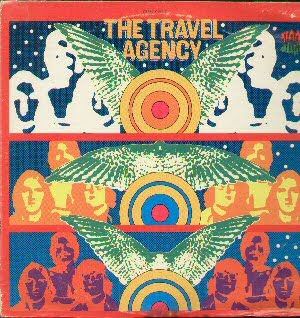 Anyway, once it gets going I think it's quite remarkable; these guys obviously had a very high level of musicianship, and whoever produced the thing really knew what they were doing. Actually, both the singer and the production remind me quite a bit of Dave Edmunds and his early Rockpile/"I Hear You Knocking" period (pleasantly nasal, lots of compression, guitars that sound like they were recorded directly into the board, etc). I think the song, lyrically, is equally remarkable; it's sung from the POV of a father talking to his hawkish draft-age son (this is 1968, remember) and the discussion seems eerily familiar in a post-9/11 world: "You can't imagine what I'm thinking," the kid says to dad. "We've got to fight them while they're small/Or their disease will soon be spreading/And then we'll never kill them all."

About the album and the people who made it, we know practically nothing, except that the group was from Houston and that member Frank Davis was involved with the Texas band Fever Tree, whose minor 1969 hit "San Francisco Girls" was much beloved of the late WNEW-FM deejay Alison Steele (a/k/a "The Nightbird").

Here's "Old Man," the album's closing track, which adapts the Buddy Holly/"Peggy Sue" guitar riff to some interesting ends; this, I think, is power pop before its time, plowing the same field as Bobby Fuller, at least to my ears.

In any case, like I said -- most obscure 60s pop and rock albums deserve their obscurity. The Travel Agency may be one of the exceptions.

If you'd like to hear the rest of it, you can download it here --http://rapidshare.com/files/51961649/THE_TRAVEL_AGENCY.rar -- assuming the same copyright police that shut down Redtelephone haven't gotten there first.
Posted by steve simels at 7:53 AM

If the rest of the album is as tasty as these two tracks, this is quite a find. The link still works, so we'll see.

I didn't know The Nightbird had passed. Too bad. She was a staple in a lot of our lives.

Not wild about the first track, but love "Old Man." Thanks for this!

Sometimes the music buying public is stupid. Fortunately it seems to go in phases.
That Diesel Park West stuff is definitely underrated. "King Fluid" is a damn masterwork.

Love the drummer - sounds like Jim Fox, the pride of Cleveland.

That record sat in my college town's record store for four years...its probably still there. I downloaded it a couple years back - its pretty good.

"Old Man" is the last song on the album. How often is the last song on an album one of the better songs on an album? Rarely if ever, in my experience. In fact, when I'm listening through obscure downloads, if I don't run into a good song after about four cuts, I'll stop listening. Sometime, if the band shows promise, I'll listen up through six cuts, but if nothing happens by then, I'm out. You only have so much time! The assumption is that the band will front-load an album with its best songs. But my great fear is that, as in the case of The Travel Agency, I'm missing that rare, very rare gem that is sometimes tucked away at the end of an album, either because the band underrated it, or because they were generously spreading the good stuff around both sides of the LP. There a still great discoveries to be made out there, I know it.