Say what you will about that Kurt Cobain kid, but he must have had a really interesting, eclectic record collection.

Case in point: From 1987 and the band's first live radio broadcast (anthologized on the With the Lights Out box set in 2004), here's Nirvana's cover of Thunder and Roses' thoroughly obscure psych-metal workout "White Lace and Stange." 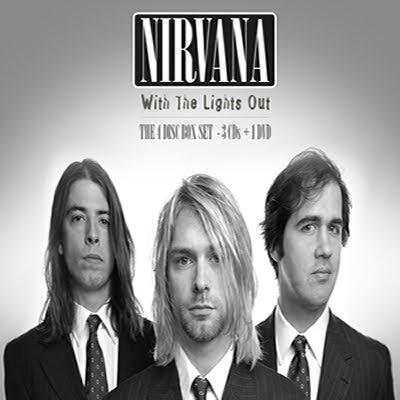 And here's the 1969 original, which I can only assume Cobain found on a cut-out bin vinyl copy of Thunder and Roses's sole album (on United Artists). 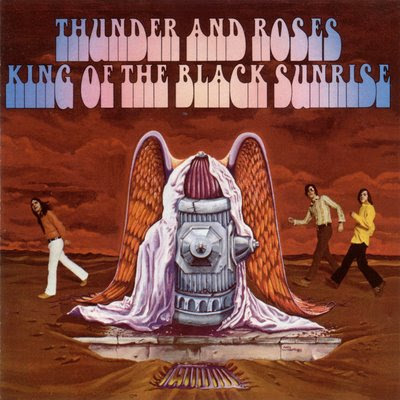 As you can hear, Nirvana's version is a little more frenetic than the original, but otherwise pretty faithful in both note and spirit, I think. As for the aforementioned Thunder and Roses, I know little about them except that they were from Philadelphia and that apparently they've developed a cult reputation since 1969. Also, T&R guitarist Chris Bond, of whom nothing has been heard of in the intervening years that I can determine, is a pretty impressive player, a judgement confirmed by a very accomplished cover of Jimi Hendrix's "Red House" elsewhere on the album (which has never been on CD, by the way).

Incidentally, I was turned on to Thunder and Roses over at the invaluable
Redtelephone66 website, which is -- alas -- about to go out of business due to threats over supposed copyright violations. If you get a chance, try to get over there and give proprietor Leonard Los some love for all the fine archival work he's done over the last few years. And tell 'em PowerPop sent you.

I never understood your interest in the redtelephone66 blog, I've checked it frequently and never found any music of interest. Most of the blogs (like Sal's) that you recommend are great. What interests you about this one? Most of the music on it is second rate.

Don't mince words, dude, tell me what you really think.
:-)

Is that Cobain singing?

I am pretty sure Chris Bond from T&R went on to become Hall & Oates lead guitarist, producer and musical director, the role that the late T-Bone Wolk took over for the last 20 years. Bond is featured on the records that followed the Rundgren produced "War Babies," the first of which featured "Sara Smile."

That's the same Chris Bond? I had no idea...

Alas, another great music download site, Zamboni, seems to have just disappeared from the innertoobz without even a goodbye post.

I can understand not wanting sites to offer free downloads of music that is still commercially available, but stuff that's out of print and will never be out on CD? Shame. So much history will be lost.

And the contrast between the two versions is cool ... Cream, anyone?

Then there are the great covers of the Meat Puppets that Nirvana did. But I really like this one, thanks and I hope you don't get sued!

I perused redtelephone now and then and despite a few pop gems it was mainly "rural" late 60's-early 70's, long-haired bullshit. You know,in the bargain bin for a reason. Still, sad to see it shut down.

Well, if for no other reason than he posted Ron Nagle's quite brilliant "Bad Rice" album, Redtelephone deserves major props.

Is that Cobain singing?

One of my favorite mp3 blogs, Little Hits, shut down about six months ago. I'm all for copyright protection - a musician/songwriter should get every last nickel coming to him - but as the Brooklyn Girl said, if there's no other legal way to hear "Who's Landing In My Hangar?" or "The Swimming Pool Q's" (and everyone has a list of their own), what's wrong with making it available?

I could rant a million words on this, but basically, SO WHAT if Redtelephone66's stuff is all 2nd rate? So is 99 percent of everybody's musical taste.

There is so much stuff that will never see the shiny aluminum disc, and without blogs like RT66, I'll just have to keep haunting the increasingly barren Goodwill bins. Even with Amoeba Records in my town, I'll never see or hear this stuff again. It's vintage junk food for the ears, and where will I go for the fix now?

Nice contrast to display that Nirvana's verison is nothing but a rushed, polluted cloud of noise and is an insult to an otherwise classic slice of psychedelia! It only takes a trained and savvy ear to hear that. This came out when Kurt and the boys were still poopin' in their diapers and when music had integrity and purpose.