The Bitch is Back

From 1966, and the first pressing of Buffalo Springfield's epochal debut album, please enjoy the ultra-rare stereo version of the song that was cut from later pressings after "For What It's Worth" became a hit -- Stephen Stills' quite remarkable "Baby Don't Scold Me." 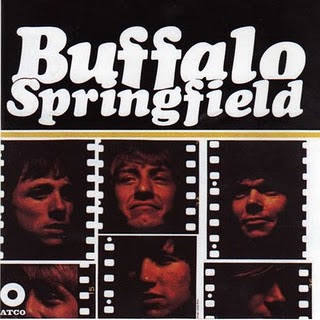 This is the Springfield in rare full-bore powerpop mod, I think (the concluding rave-up and the quote from "Day Tripper" are particularly telling) and it's one of my all-time faves of theirs. The stereo version has never appeared on CD, incidentally (this is the best vinyl rip I've ever been able to find) and believe it or not, the sloppy production sounds even worse in mono.

In any case, I think a smart contemporary group should cover this immediately. I all but begged the guys in my 80s skinny-tie band to have a go at it back in the day, but they seemed to feel the song was a little goofy, so it was not to be, alas.
Posted by steve simels at 12:01 AM

Great LP! One of my favorites by them. Good song, along with Everybody's Wrong and Go And Say Goodbye. You should have done the cover, challenging vocals. I could hear you playing the guitar part Steve.

Me and a friend of mine Josh used to do Go And Say Goodbye way back on acoustics and 2 part harmonies, wasn't bad as I could recall.

Like a few other good 1960s bands, the Springfield sounded joyously young and mature beyond their years at the same time.

Nice find, steve, thanks for posting!

Ah, vinyl. Over the years, the teeny little pops and clicks have become part of the music.

A small piece of the Springfield performing "For What It's Worth" on the Smothers Brothers show ... live, of course.

Wow, Stills sure was alive and kicking back then! Thanks, I have never heard this before.

And a propos of nothing other than another band with people who could really sing ...

Who is the 6th guy on the album cover, lower left behind the Atco logo?

I think it's Dewey Martin, the drummer whose also in the top row in the middle.

Now that you mention it, that's strange art direction for a five man group...

Isn't this on the BS box set?

To my very great annoyance, no, it isn't. There's another version -- maybe an acoustic demo or something, I forget.

But the stereo album cut has never been on CD.

I have this album w/"Baby Don't Scold Me" on it. Found it in Goodwill decades ago for $1 in mint shape. I just wanted to boast.

I stand corrected. It was as Steve said: The song was never reissued in stereo.