The Last Skip Spence Song I'll Ever Post. Seriously -- I Mean It This Time.

This one's from Moby Grape's disastrous 1971 "comeback" album on Warner Brothers. I say disastrous because (although there are actually a couple of fun songs) the sole contribution from the group's best songwriter, i.e., Skippy, and thus pretty much everybody's reason for listening at this point, turned out to be...an instrumental.

Which is five minutes or so of exactly what you're afraid it might be from the title. 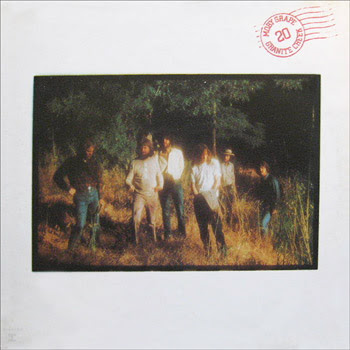 If I'm in the right mood, this actually strikes me as kind of funny, and for what it's worth, it's at least listenable. Still, and I can't recall what my take on it was when it first came out, it probably should have been a clue to fans that its auteur had pretty much lost his marbles.
Posted by steve simels at 12:00 AM

I can see how this might seem quaint to pre Anacostia high school motherfuckers, but I still live in a place where High C is distributed as an exotic drink in Asian restaurants.

Can someone please translate the above densely-written comment into English?

I got through 25 seconds before I decided to go back to the Mike Post on hold music as I wait for customer service for my printer.

What - did Spence die & leave you in his will or something? In return for "All Skip, All the Time"?

Can someone please translate the above densely-written comment into English?

What I was drunkenly trying to say, I think, is that's the least Asian thing I've ever heard. I can't be certain, because I can't unpack that sentence either.

Don't you guys see it? The obsession with the music? The alliterative names? Steve Simels is Skip Spence!

There can be no other explanation.

The song is actually well crafted. I find it interesting how the western instrumentation is melded with the Koto. The drumming, in particular. There is also a live version of this on you tube. I had assumed that Skip appeared briefly during the recording sessions and they just salvaged a Koto track he had done, building a song around it. The live version had me rethink that, although skip plays his parts on a guitar live. I do think they were humoring Skip to some extent but there are many, very experimental, tracks on that album. Don Stevenson has steel drums on one of his tracks, etc.