And speaking as we were yesterday of what must have been Kurt Cobain's interestingly eclectic record collection, please enjoy Nirvana's 1988 Sub Pop debut single -- their kick-ass reimagining of Shocking Blue's 1969 European hit "Love Buzz." 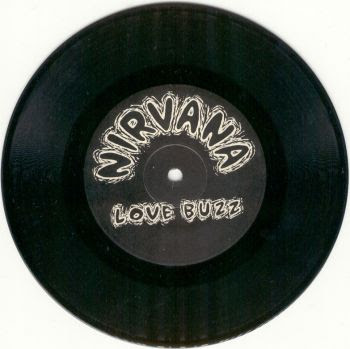 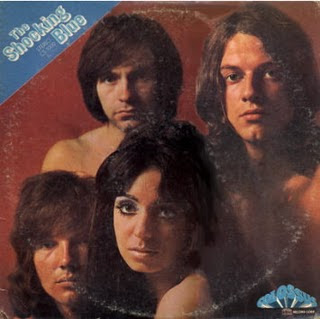 I've enthused about Shocking Blue around here on numerous occasions, and in fact I grabbed a copy of that album back in 1970 after reading Greil Marcus' surprising rave review in Rolling Stone. But "Love Buzz" has always struck me as being one of their kitschier efforts. Maybe that's what attracted Cobain to it in the first place -- there's a story I heard somewhere that he actually had the album on eight-track, although I have no idea if that's true. In any case, the Nirvana version is a flat-out killer, I think, and I'm guessing it stuck out from the rest of the Seattle proto-grunge sludge Sub Pop was pushing at the time like a tarantula on a piece of angel food cake. Seriously -- one listen and you know you're in the presence of a world-class band, if not necessarily a world-class band whose frontman would turn out to be the voice of a generation.
Posted by steve simels at 12:00 AM

Great cover... I hadn't heard this in about 18 years until some blog uploaded most of the Sub pop singles series. Bleach-era was beyond awesome. Over the years it's been refreshing to listen to it in favor of Nevermind or in Utero only because despite the popularity of the group the album has never been as popular

I can't figure out why noone has ever covered "Hot Sand."

The transformation of a rather tacky, overwrought psychedelic pop song into a kickass buzz-guitar rocker is what impresses me.

Thanks for posting this.

I'm gonna put something up from Shocking Blue's "Live in Japan" LP next week.

It was only released in Japan and Holland back in the day, it's never been on CD, and I'd been trying to find a copy of it since 1975.

Coming across it on the intertubes recently was like The Holy Grail for me.
:-)

Fantastic! I love these compare and contrast posts. It really provides insight into the process of great musicians.

While I have never been a huge Cobain fan, Nirvana makes me pull the car over and turn it up all the time. If that makes any sense at all.

Wow, the Nirvana is great. It has all the exoticism of the Shocking Blue version, but so much more energy!

At least these two cover comparisons are in the same solar system. What amazed me is how Cobain found a punk song in the Vaselines' "Molly's Lips." That's cross-galaxy stuff.

Don't tell me you actually buy that 'voice of a generation' shit. And for the record Shocking Blue kicks Nirvana's ass.