Weekend Listomania: Special I'm in With The In Crowd Audio/Video Edition

Well, it's Friday and you know what that means. Yes, my Oriental Crème de la Boinkoise! Fah Lo Suee and I will be off to a shopping mall somewhere for a Teabagger protest against the Communist takeover of Hooters, or whatever it is they're cheesed off about. In any case, we'll be packing heat, just in case anybody gives us any crap.

That said, further posting by moi will be sporadic for a few days as a result, especially if we can't make bail.

And my totally top of my head Top Seven are:

A twofer: These guys, who emerged to much fanfare in 2007, came from the same NYC scene as The Strokes and clearly wanted to be them. But on the basis of this song, which is, shall we say, derivative of Joy Division (only without the warmth), they just as clearly seemed to think they had come up in Manchester in 1978. To my knowledge, however, Interpol's singer has not yet hung himself in emulation of Ian Curtis. Alas.

After R.E.M., the most beloved band out of the whole post-punk Athens, Georgia scene. Personally, I never got them on any level.

During the late 60s/early 70s heyday of Detroit rock -- MC5, Stooges, et al -- these guys were widely considered to be the absolute worst band in town, but apparently that was their point. In any case, I never heard either of their two LPs, which I'm told are highly prized by people who like that sort of thing. I believe there's also a Detroit legend about The Frut getting the shit kicked out of them in a parking lot by members of Brownsville Station, although I may have that backwards. 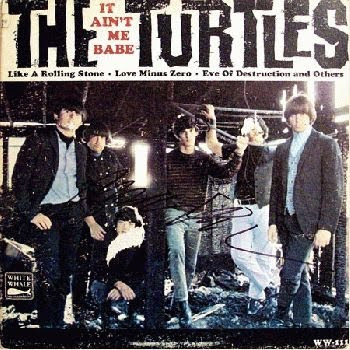 If there was ever a School of a Particular Band, it was the original folk-rock Byrds, who influenced just about everybody in their wake from the Beatles to the Velvet Underground (and that's just in the 60s). In any case, of all the bands who emerged immediately after "Mr. Tambourine Man," nobody did it better than The Turtles, a fact that's been mostly forgotten as a result of the efficient hitmaking pop machine they became in their latter-day incarnation. "Glitter and Gold," a Mann-Weill song from their very first album, has always seemed to me to be particularly representative; I actually saw them do the tune, and much else, at a teen club in Waukegan, Illinois in the fall of 1965. They were great, in case you were wondering. 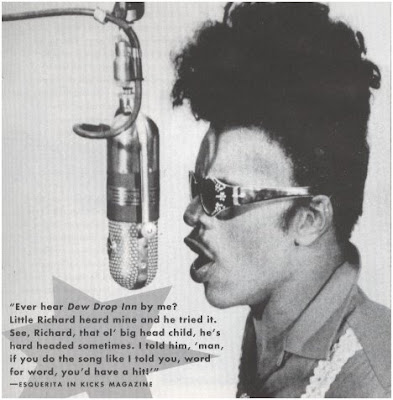 Lots of people have wanted to sing like Little Richard over the years -- Otis Redding and Paul McCartney spring to mind -- but to our knowledge, nobody but the howling weirdo christened Eskew Reeder, Jr. ever actually tried to be him. To be strictly accurate, there's some disagreement among historians as to who actually influenced who, but it's clear that executives at Capitol Records, who signed Esquerita and issued his rather astonishing eponymous album in 1959, were trying to cash on the success of the "Long Tall Sally" auteur. Although if you've ever heard the record --including "Esquerita and the Voola" (in the clip above), which sounds like an unholy shtup between Martin Denny and Sun Ra -- you really have to wonder what they were thinking. 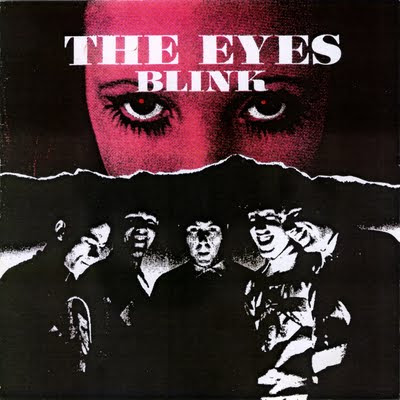 There were a lot of Brit bands, circa 1965-66 who did the early Who almost as well as the Who -- The Creation, and The Birds (featuring a young Ron Wood) among them -- but The Eyes, who are perhaps best known for their classic freakbeat workout "When the Night Falls," may have been on balance the best of them. In any case, "My Degeneration," which can be heard at the link above, probably earns them the nod simply for the chutzpah of the title. 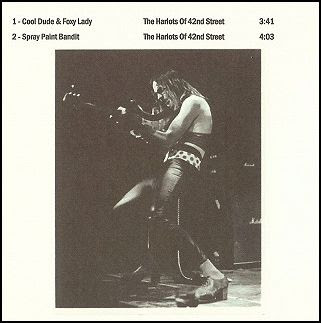 New York Dolls wannabes and perennial also-rans on the early 70s New York trash glam-rock scene that coalesced around the Mercer Arts Center. David Johansen: "We used to compete with the Harlots of 42nd Street which was a group of guys who looked like truck drivers but dressed like the Dolls and wore, like, fishnet stockings over these big muscular hairy legs. They were my favourite band." Incidentally, I've included both sides of their only single here, mostly because the A-side is so utterly awful I felt the slightly less appalling B-side deserved a hearing out of simple fairness.

And the Numero Uno misunderstood avatars of a thriving and fertile rock scene clearly were... 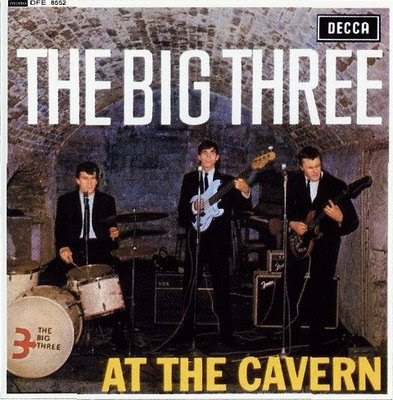 Musician's musicians, and apparently the loudest band in Liverpool, these guys were briefly managed by Brian Epstein and seemed poised for big things. It didn't happen, of course, for all the usual reasons, but bassist John Gustafson has been a major figure as a sideman ever since; that's him on Roxy Music's "Love is the Drug," among other interesting credits through 2007, and as far as I can tell he's still active.

[Shameless Blogwhore: My parallel Cinema Listomania -- theme: most memorable score for a non-musical film or TV show -- is now up over at Box Office. As always, it would put a song in my heart if you could take a moment to go over there and post something pithy. Thanks!]
Posted by steve simels at 12:00 AM

First things first: what the hell were you doing in Waukegan?

There have been ups and downs, but there has always been a strong current of Chicano influence in the L.A. scene: Ritchie Valens and the Champs in the 1950s to Los Lobos and El Chicano decades later. But an important bridge group was Thee Midniters, who are perhaps best known for their cover of "Land of 1000 Dances" and their Chicano-surf instrumental, "Whittier Blvd." They were a fantastic live band, and the highlight of their sets, to me, was "Love Special Delivery":
http://www.youtube.com/watch?v=CbwA-E0PvzQ

I went to school my freshman year at Lake Forest, which is down the road from Waukegan. And Thee Midnighters were indeed fantastic...

The grunge era was rife with Nirvana-wannabes, none more pedestrian than Seven Mary Three and their radio hit "Cumbersome."
Of the post-REM janglers, Love Tractor deserves a shout-out...imagine R.E.M. sans Stipe, more bubblegum influence and no agenda to speak of.

A friend of mine told me she left Athens in the mid eighties primarily because "everybody you talked to was in a goddamn band".

There was a song called "Cumbersome"?

I thank that's what you call "ironic."

I nominate the Royal Crescent Mob in the late eighties in Ohio. They were nominally in the "alternative" scene of the time, with a punk/funk sound supposedly influenced by the Red Hot Chili Peppers. Which doesn't really do them justice--they were an incredibly fun band live.

Unfortunately that didn't translate well into their studio recordings. I really liked Omerta, but their later records were mediocre to bad. At some point they decided to go with a more traditional blues-rock kind of sound, and it just didn't work as well.

two of the awesomest bills I ever saw were the RC Mob opening for Screaming Jay and, later, the Ohio Players. Dave Ellison, the singer, claimed to have cut Sugar's lawn as a teenager.

Although you have to give them credit for following up the massive hit "Happy Together" with a single called "The Grim Reaper of Love".

This category demands an awful lot of thinkin' for a Friday. But I would say that of the Stiff Records gang, Ian Dury is sadly under-appreciated on this side of the pond. I understand there's a biopic on the way. Interesting bloke.

Completely off-topic, but I've gotta share: Hal Willner is apparently involved in a project involving Neil Young, and put on a concert in Vancouver during the Olympics, with various artists covering his tunes. A guy named Eric Mingus, who I understand is the son of Charles, did a version of "For The Turnstiles," reconfiguring it as a field holler, and it's frickin' amazing.
The boot of the whole show is here.

I was in Athens from 78-85, but to my lasting shame was almost entirely disconnected from the music scene. Calling Love Tractor post-REM isn't quite right. They were around in 81 or 82. A classmate included them on his TV production project, a commercial for an imaginary Athens music compilation called _Stigmata Youmama_. Ah, the wit of undergraduates.

Man, I figured those Harlots of 42nd Street singles would have at least appalled somebody by now...
:-)

Well, the Harlots songs were bad, but they weren't so awful as to warp the very fabric of space and time. They were just sort of . . . stupid and pointless.

Whatever happened to Tin Huey, who were part of that whole Akron scene that spawned Devo?

After R.E.M., the most beloved band out of the whole post-punk Athens, Georgia scene.

Poorly phrased on my part. I should have said "most fondly
remembered."

The Beserkely label out of Berkeley was pretty cool... basically Greg Kihn (pre-"Jeopardy" and with a great lead guitarist named Dave Carpender) and the fabulous, underrated and underappreciated Rubinoos. Kihn did probably the greatest cover ever of a Springsteen song - "For You" - and live, the Rubinoos used to do a killer fuzz guitar reworking of "Sugar Sugar". Beserkeley also featured Jonathan Richman, but he didn't play locally nearly as much (if at all) as Kihn and the Rubinoos.

Cripes, first time I've been able to get over here and play in weeks and the question is too hard for me to answer. The only band I can think of off the top of my head is Mountain. I'm sure they're derivative of something but haven't had enough coffee to decide what that is.

Anyway, I adore and miss all of you. Maybe I'll try again next week.

The Individuals - Walk By Your House

Human Switchboard - I Can Walk Alone

The Bongos - Glow In The Dark

Love/Arthur Lee never achieved the commercial success they deserved ... maybe because it's actually hard to categorize them ...

And The Fugs, NY's prototypical 60s political-satire-Lenny-Bruce-tinged-push-the-envelopers probably pissed off too many members of the establishment to make it above ground, which I would guess was the point.

Hmmm, nobody's mentioned the late Willy de Ville (both as himself and as the leader of Mink de Ville) yet. Maybe a little too well known to qualify for this, but he was the exemplar of that whole Latin-tinged R&B from New Yawk City thing. A shame he didn't hit it big.

Are there currently any comparable city scenes to the Athens or Seattle movements of the not-too-distant past?

Ralph Carney, the reedman, toured with David Thomas in between Pere Ubu's bouts of existence. Saw him in that capacity in Boston in the 80's. His kid, Patrick, is one of the Black Keys, the awesomest duo out there now, in my book.

Speaking of Boston in the 80s, it took Morphine to make a star out of Mark Sandman, but every hipster then thought Treat Her Right was the bee's knees. Both their albums are pretty good, but they never went anywhere much.

Speaking of post something, Peter Prescott's post- Mission of Burma band, the Volcano Suns, had the best first two albums of melodic punk I ever heard. Better than Nirvana. I'm always the last person responding to these threads, so no one will care, but check em out and prove me wrong. "Silvertone", the last song on the first one, dug up the last truly classic guitar intro that I can think of.