Weekend Listomania (Special Doctor, You've Got to Be Kidding Edition)

Well, it's Friday and you know what that means. Yes, my Oriental amanuensis-with-benefits Fah Lo Suee and I will be off to beautiful Sedona, Arizona, and the ranch of Sen. John McCain (R-Manhood in a Blind Trust). Once there, I'll spend as many hours as possible out on the street in front of the main house, haranguing potential undocumented aliens while dressed as the beloved 60s/70s cartoon commercial pitchman The Frito Bandito.

You know, just to be a prick about it.

That said, further posting by moi will be sporadic for a few days as a result.

No arbitrary rules of any kind this time, you're welcome very much. And yes, I'm pretty sure we've done this topic before, but I'm equally sure my nominees are mostly different this time. In any case, I doubt the Listomania Police will be after me. 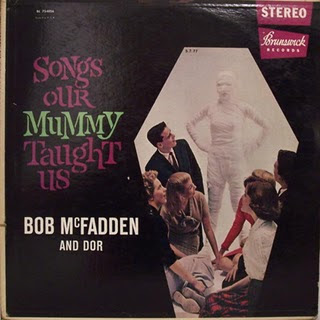 That's Rod McKuen -- yes him -- playing the part of the beatnik at the end, by the way. Even as a kid, I knew this record was lame. 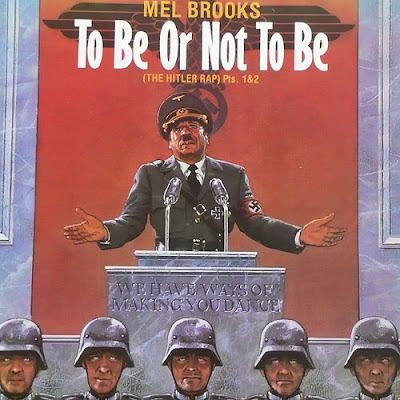 It's Mel Brooks. It's a rap. It's about Hitler. Jeebus, what more do you want? 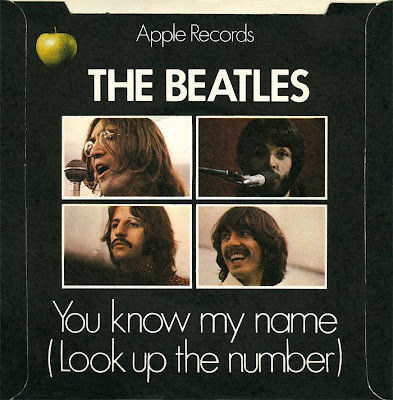 "Good evening and welcome to Slaggers." A throwaway joke by the Fabs, but all involved cover themselves in glory -- in particular, Paul McCartney as the unctuous crooner and special guest Rolling Stone Brian Jones on lounge saxophone. 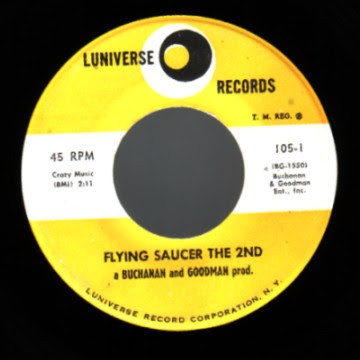 The second entry in the long-running series and on balance, I think, the funniest. 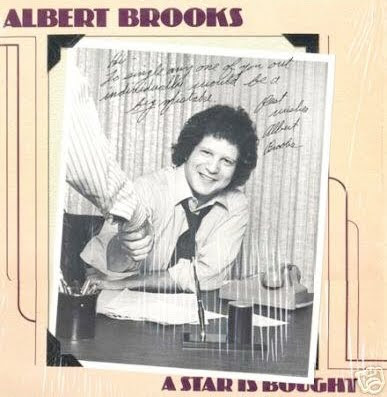 And years later, Buchanan and Goodman fan Brooks did his own Flying Saucer record, only instead of using snippets of actual hit records, he made up fake ones. "And whatever royalties this thing does earn, at least the checks are going to be coming to a Mr. A. Brooks and not some schmuck I don't even know." A work of genius. 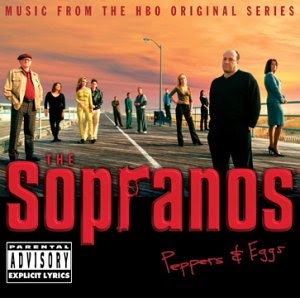 One of those mashup records the kids seem to like so much, and committed for The Sopranos soundtrack album for no logical reason I can determine other than both songs are in the key of E. Or maybe there's some kind of irony I'm missing. In any case, it's obviously supposed to make you go "How clever!" but unfortunately it's just annoying.

And the Numero Uno you-can't-be-serious record of our time simply has to be... 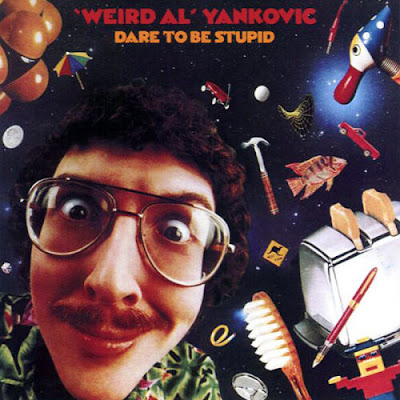 Most of Weird Al's parodies over the years have struck me as barely even sophomoric, but I remembered this Devo pastiche as being not just clever but actually a better Devo record than Devo themselves ever made. Having now listened to it for this first time in at least a decade, let me simply say -- uh, I was very wrong.

Alrighty, then -- and what would your choices be?

[Shameless blogwhore: My parallel Cinema Listomania -- theme: Best or worst art direction in a sci-fi movie -- is now up over at Box Office. As always, if you could see your way to going over there and being contentious, it would be, as my people say, a mitzvah. Thanks!]
Posted by steve simels at 7:14 AM

Such a pregnant topic:
Martian Hop: The Ran-Dells
You Put Me Through Hell: (Natl. Lampoon Joni Mitchell parody, a cousin of the Joan Baez parody, and it would be a shame to forget "Genius is Pain," the Lennon parody)
18 With a Bullet: Pete Wingfield (borderline novelty, but certainly can't be taken seriously)
Sixty Minute Man: Billly Ward & the Dominoes (only got played because radio stations treated it as a novelty...of course it was a straight autobiographical sketch of Lovin' Dan..)
Finally, "Freelove Freeway" by Ricky Gervais and Noel Gallagher is one of the best goofs I've heard in years

First, I gotta disagree with you about the Peter Gunn/Every Breath mash-up, which is brilliant, and was even better if you saw its use in the Sopranos episode.

With that out of the way:

Perhaps the greatest novelty song of all time:

Purple People Eater by Sheb Wooley!
(I can't believe I found a youtube of a "live" performance! --
http://www.youtube.com/watch?v=X9H_cI_WCnE)

And then of course THE novelty song of the 60s -- They're Coming to Take Me Away, by Napoleon the XIV!

And from the 70s, perennial musical exploiter of fads, Ray Stevens, with The Streak:

Worst:
The entire work product of Ray Stevens.
Not that it's the best but the 60's novelty song "There coming to take me away ha ha, he he..." sure was fun to the ears of this 10 year old, not that I want to hear it now...

Ian McDonald claims in Revolution in the Head: the Beatles' Music and the Sixties that the crooner in You Know My Name might just be Bonzo Neil Innes, a fan and friend of the Fabs.

Does your chewing gum lose its flavor on the bedpost overnight?

Seriously, one of the stupidest songs of all time.

On the other hand, I have a soft spot for Monster Mash ...

Napoleon the XIV's "I Owe A Lot to Iowa Pot" is a personal fave.

Along the same lines, NRBQ's Wacky Tobacky is also smokin'.

Not the best version since it lacks the spoken intro.

I agree with BG that "Monster Mash" still rocks, and I can never forget Jim Backus's "Delicious," which was recently featured here.

But #1 for me has to be Stan Freberg's "Old Payola Roll Blues Parts 1 and 2." And thanks to YouTube, you can listen to Jesse White and Stan Freberg do their thing without flipping over the 45:

I think I've mentioned it, but Napoleon XIV was a staff engineer at Associated Studios, where my high school band The Plagues did the demos I wrote about here.
http://powerpop.blogspot.com/search?q=the+plagues

I wasn't there, but a couple of the other guys were actually at the "They're Coming to Take Me Away" session and did, in fact, record some screams for it that got mixed down on the actual single.

Sadly...
tragically...
I did NOT have to Google the lyrics.

Roger Miller was the king of novelty songs to my mind: "Dang Me", "You Can't Rollerskate In A Buffalo Herd", "Chug-a-lug", etc. Brilliant stuff.

I'm surprised you left out Bruce Springstone's "Meet The Flintstones" - didn't you post it on here once before?

(And while it isn't a goof or novelty per se, "Tweeter And The Monkey Man" is hilarious.)

Would the Stones' "I'd Much Rather Be With The Boys" count?

I can't believe nobody's thanked me for the Albert Brooks.
:-)

Electric Six - I want to take you to a gay bar


The Rezillos - I love my baby cos she does good sculptures

And the absolute classic of this genre, don't even bother arguing with me -
Barnes & Barnes - Fish Heads
(and whatever happened to that tall hipster dude in the video?) ;)

Blotto, "We Are The Nowtones".

I see the Flying Saucer disc claims to be 2:11, but the clip is 1:46. Any story on this? Someone beat fair use & have their song removed?

"Larry Move Your Hand" by Larry Woodside and 'Yolanda'. Of course, since Larry's part was done live each time he played it, it was always a little different.

The Senator Bobby and Senator Everett versions of "Wild Thing."

(As an aside, I've heard that is not THE Brian Jones on sax, but someone with the same name on the Beatles tune.)

So few to choose and so much time:

All of the above are in my Looney Tunes playlist.

The Coasters had a lot. My favorite is "Shopping for Clothes."

Late to the topic, not a lot to add - except

agreement with MBowen on Roger Miller - my dad had his Greatest Hits, and it is the first album that I specifically remember. At (5, 6, 7?) years old, my kid brother & I particularly loved 'You Can't Roller Skate...', but also the others you mention + 'England Swings' & 'King of the Road'.

'King Tut', listed by Dominic, was huge a bit later, of course, and I think is still good for a chuckle. As is 'You Know My Name'.

But the Kenosha Kid gets my undying thanks for the 'Fishheads' link - I only have a vague memory of the song, but, that is truly a can't-argue choice!

Finally, I'll choose a few well-known borderline songs, which are probably outside the spirit of this Listomania, but, well, not too far out...
Fountains of Wayne - "Stacy's Mom"
TMBG - "Istanbul not Constantinople"
Weezer - "Beverly Hills"
Beck - "Loser"

I'm late but I have a couple more. Adding to the Monster Mash love. That was a great one. I'd also nominate Itty Bitty, Teeney Weeney, Yellow Polka Dot Bikini.

And Alan Sherman's On Top of Spagetti was an all time fav of my youth. Not ashamed to admit I still remember most of the lyrics without googling.

Also wondering if Bobby McFarren Don't Worry, Be Happy counts as a novelty. Thought that one was fun the first five times I heard it but it did get old quick.

Zappa's "Baby, Take Your Teeth Out" and "Big Leg Emma." Okay, maybe Zappa's not novelty but a category all to itself.

Tiny Tim's "Tip-Toe Thru' The Tulips", "Song of the Sewer" by Art Carney and Phil Harris' "That's What I Like About the South." Sorry, not post-Elvis.

BTW, Steve––"You Know My Name (Look Up My Number)" is one of my very favourite Beatle's recordings.

Sorry, but I like "Gitarzan" by Ray Stevens. The production on some of his records in that period was really superb (I liked the whole fake "audience" thing). But "The Streak" sucked and ended my semi-romance with him.

As for Weird Al, I'd have to go with either "Another One Rides the Bus" or "My Bologna," two songs that my father, a long-standing fan of Harvey Kurtzman and Stan Freberg, just thought were hilarious.

BTW, not really a novelty record that exists in real life, but I remember several FM DJs playing Atlanta Rhythm Section's "Imaginary Lover" at 45, which made it sound EXACTLY like Stevie Nicks and Fleetwood Mac...

One more thought ... I would be remiss if I didn't mention The Who's "Boris the Spider" ...

Learning that Brownsville Station had another song besides their inescapable radio hit (I mean, of course they did, but still...) is roughly akin to learning about Zager & Evans's song about a suicidal rapist. This is why I frequent this site: it's the stuff you learn....

I'm for the Nutty Squirrels with Uh-oh parts 1 and 2. Nothing like jazz hipster rodents...much cooler than David Saville's pets...