The Moving Finger Writes. Or in This Case, Maybe Not...

So yesterday I was working on a piece for Box Office that had something vaguely to do with Zager and Evans' still laughable mega-hit "In the Year 2525," and I had occasion to check out the Z&E entry at Wiki.

When this little tidbit caught my eye.

The band signed with RCA Records, who claimed they were "The Next Big Thing," but follow-up singles, such as "Mr. Turnkey" (a song about a rapist who nails his own wrist to the jail wall as punishment for his crime) achieved only minor success.

And I thought -- well, obviously I need to hear that one. 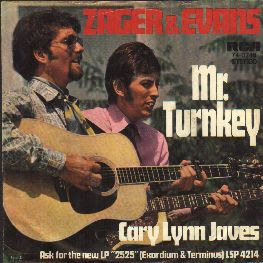 I'm speechless, frankly.
Posted by steve simels at 12:00 AM

Tell us you're sorry for ever making us listen to it!

I can't believe that RCA released it as a single and gave it the full picture sleeve promotion.

Didn't Elvis cover this in Vegas?

It's a good thing the Weasels never heard it back in the day.

Funny how we both had the same idea for today's post.

Jeebus, I just listened to the 70s abomination you posted today.

All the other atrociousness aside, how does one go about nailing their wrist to a wall? Do you start the nail by slamming your wrist against the point? Or maybe he swiped a Cheney nailer from the license tag shop:
http://tinyurl.com/y499wkk
I'm sitting here crying in my coveralls trying to figure it out.

This is the lead track on my "hand injury" mixtape; next up, "Moulty!"

Can you imagine a whole slew o' jamokes sitting around in a room saying, "Hey, this sounds like it might be a hit!"?

Is there some significance, some deep meaning I'm missing, that the date mentioned in the song is also the date of the Woodstock Festival?

I think Peter nailed it. My initial reaction was yes, it's so bouncy.
:-)

I downloaded the whole album it's from -- I haven't had the nerve to listen yet...

I dare you to listen Steve, I double dog dare you!

I think that you should send this to Leonard Cohen and Richard Thompson and tell them "Take That!"

Actually, if you got Will Oldham (aka Bonnie Prince Billy) or Bill Callahan (aka Smog) or The Handsome Family to slow this down to a tuneless dirge, Mojo and Uncut, along with a bunch of websites like Pitchfork, who would absolutely wet themselves over this.

Steve-
Is this on the album?
http://www.youtube.com/watch?v=eLsWW7Z03Sk&feature=related
2525 in Italian!
Cause why should Italy be spared?

Maybe there is a Signore Carceriere out there somewhere too!