More reasons to be cheerful: The archivists over at Sundazed Records are unleashing the first ever over-the-counter official collection of live recordings by the incredibly great Moby Grape. The album drops, as the kids say, on April 20th. 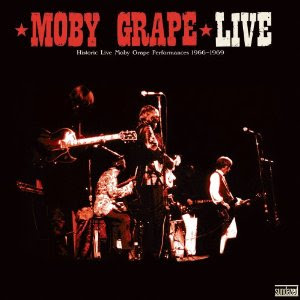 Hardcore fans will have heard some of this before, mostly on inferior bootlegs, but the Sundazed upgrades -- including the Grape's complete (at last) set from Monterey Pop (in significantly improved sound), and the astounding, improvised on the spot 17-minute acid rock masterpiece "Dark Magic," recorded at San Francisco's Avalon Ballroom on December 31, 1966 -- are genuinely overwhelming. I have insisted on numerous occasions here that the Grape were not only by far the best of the Bay Area bands back then, but one of the greatest American bands period, and I think there are moments on Moby Grape Live when those judgements are inarguable.

You can -- and definitely should -- pre-order the album here.

Normally I would post an mp3 from the album at this point, but I think in this case it might be a little tacky. (In any event, you can listen to samples from all 19 tracks at the Amazon link above.)

In lieu of that, however, here's a little tribute to the genius of the Grape's great Skip Spence. From 1985, enjoy downtown supergroup The Golden Palmoninos -- featuring Michael Stipe on lead vocals -- with their, for want of a better word, interesting re-imagining of Skippy's Grape classic "Omaha."

I haven't listened to that in ages, actually; is it just me or is that 80s drum sound really obnoxious?
Posted by steve simels at 12:01 AM

That's awful. How's about a Listo for worst desecration of a classic by people who should know better?

Well, 2010 is turning into quite the year for the excavation of pop culture Holy Grails --

first was The T.A.M.I. Show, then the restored Metropolis, and now your beloved Moby Grape.

Who knows what other gems lurk in vaults yet undiscovered?

what post-Elvis musical "holy grail" would you most like to see released?

Real ones, that is, not the rumors.

It sounds MUCH better on vinyl. Maybe even cd. I will check it out after work to make sure, but I think the mp3 compression is making that snare sound worse than it originally did. You can hear the same distortion in the occasional cymbal Anton hits.

Pretty awful, but it can't touch the live Stipe/Natalie Merchant cover of "To Sir With Love"...truly, staggeringly dreadful.

I've gotta go with the Flamin Groovies as the best San Francisco band.

Susanna Hoff did a good version of To Sir With Love on her 90's solo album, too.

what post-Elvis musical "holy grail" would you most like to see released?

The Yardbirds at the Fillmore West, October 1966.

They were supposed to release the complete concert of the Move at The Fillmore West from '69. I wonder whatever happened to that?

The Ophelia's version of "Lawrence of Euphoria" does Skip some justice. It's as almost up to Viv Stanshall standards.