And on the Third Day He Rose

In honor of President Schmucko's favorite holiday -- Easter -- here's the greatest photo of all time.

The late Jeffrey Hunter (Captain Pike on the original Star Trek pilot), as the Big J.

In Nicholas Ray's 1961 remake of Cecil B. DeMillle's King of Kings.

In which Christ ascends to Calvary in a pair of green Italian hushpuppies. 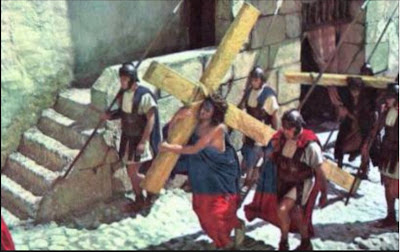 I am not sure if you can see that in the film itself; it's a production still that was in the book included in the deluxe MGM LP version of the movie's Miklos Rozsa film score.

That's truly gorgeous, BTW; Rozsa remains one of the greatest of all film composers.

In all seriousness, I bought that LP when I was a kid in the early 60s, being a big Rozsa fan, and I treasured that photo as hilarious from day one. I lost the book years ago, so I actually went to eBay in 2018 to get a new copy and scan the photo.

I should add that I bought said LP at the fabulous Teaneck Record Store on Cedar Lane in my home town. Remember record stores?

It's long gone, obviously, but it was where the restaurant on the left was in that more recent photo of Cedar Lane. I used to ride my bike there of a Saturday afternoon and browse; they didn't have rock 45s, but I used to dig going through the stacks anyway. 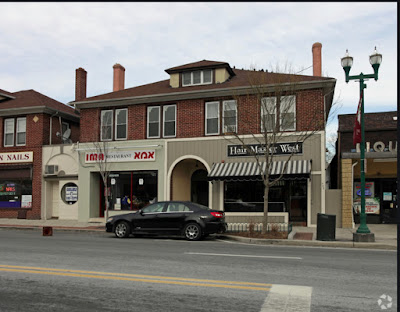