I Actually Got Paid For This (An Occasional Series): Special "Brit Jewish Guitar Hero" Edition

From the June 1980 issue of The Magazine Formerly Known as Stereo Review, please enjoy my interview with Mark Knopfler of Dire Staits. 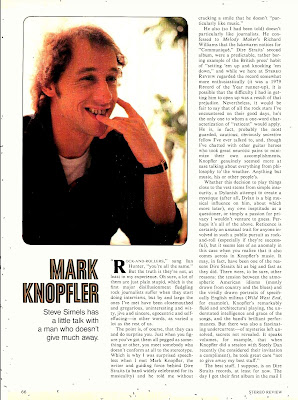 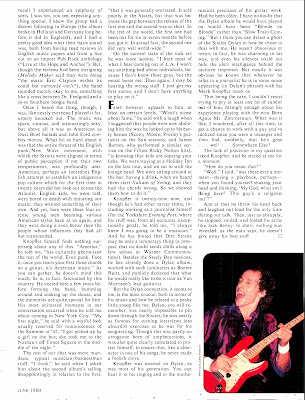 Remember -- click on the images to increase them to readable size. You're welcome very much.

I think, in retrospect, that it's a very good piece. And I heard at some point, from Knopfler's then publicist, that he liked it.

That said, and I've never told this to anybody except a certain Shady Dame of my acquaintance, but writing it was, uh, somewhat problematic.

Or, to be blunt: When I actually chatted with Knopfler (over lunch at some hotel), he was (a) suffering from one of the most stupendously awful hangovers in drinking history and could barely grunt, let alone talk. And (b) the batteries in my cassette machine had died, unbeknownst to me, and nothing we discussed was actually recorded.

The point being, in case you haven't been paying attention -- I had to write this two weeks after the fact by essentially doing it from memory or imagination. Including the quotes.

Have a great weekend, everybody.
Posted by steve simels at 6:32 AM

For the record, I like Knopfler's solo stuff better than Dire Straits...

brain fart I can't remember the 2 things that your record reviews rated at the end; something like; recording and then a grade and then quality? and grade. help me. That guided me in my snobbiness back in the day :)

It was up top

However you did it, great article. Not surprised MK thought so too.

I remember reading that one back in the day; the bit about want to tour as Van Morrison’s guitarist stuck with me. I never saw Knopfler with Van the Man, but I did see him on tour as Clapton’s second guitarist back in’88 or so; as I recall, the two played well together.

I think you were safe, Steve. Sounds like Mark wouldn't have remembered if he was misquoted, anyway :-)

thank you. maybe I read upside down :) some of those were hilarious and sort of subversive as I recall.

I used to hate the format, but then when I actually started to do individual album reviews, I had a lot of fun with it. :-)

I love the ending, your question about Dylan having "gone somewhere else?" I remember this interview, actually, because I was a huge Dire Straits fan, especially of Communique. After that, they went stadium rock and got very boring. But Knopfler remains a fabulous guitarist, and stylist. Local Hero is still one of my favourite soundtracks.

You think his reticence was really just that his head hurt too much to speak?