It's Sweet Jane Week: Special "Your Monday Moment of Words Fail Me" Edition

Phair apparently did that for an episode of The Good Wife, and I was unaware of its existence until I stumbled across it at YouTube over the weekend (while looking for her version of the theme from the Banana Splits, with Material Issue). It apparently has never been on CD.

In any case, it boggles the mind. I think it's not only the best interpretation of the song ever, but the only one that hits as hard and as deeply as the original version on Loaded. 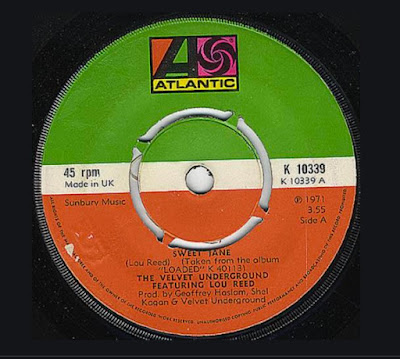 Seriously, when I heard Phair doing it other day, it was like discovering the VU record for the first time, a moment of my youth I still remember. Rock-and-roll was never the same for me again after that, an experience I didn't expect to relive at my advanced age. Especially in the trying time we're all enduring.

And thanks, Liz. As the kids say, you rock.
Posted by steve simels at 5:51 AM

Well this was a pleasant surprise on a Monday morning. If you've not done so read her memoir Horror Stories. Very interesting.

crazy u and sal have Ms Phair on thee like one not so much :) same day. on

This is great. I'll always listen to covers of Sweet Jane. My favorite version is by Willie Nile. He just kills it.

I'd forgotten about Willie's version. Yes, it's great.

Great, but I’m partial to the version on Lou’s 1983 import Live in Italy, which leads off the album. It’s the band from the Legendary Hearts sessions, including the great Robert Quine on guitar, and the whole thing is fantabulous. I wore that record out...

Liz Phair is tres cool though.

That's another one I'd forgotten about, and yes you're right.

Can't forget Mott the Hoople's take that kicks off the All the Young Dudes LP.

This is pretty darned good. I especially like how she does her own version of the nonsensical little intro on the Velvets version. Would have been great if she had done the "heavenly wine and roses" bridge excised from the original. Better than Mott or Cowboy Junkies but not better than Lou from Rock And Roll Animal. There's a fine line between playing it too straight and taking too many liberties and I like how she walks it. The best thing I can say is that if Lou's version had never existed and Liz's had been the original, it would still have become a classic. Thanks for posting it.